3D display screen on mobile devices could be on the horizon 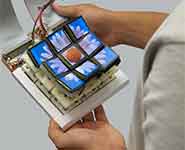 A team of scientists, led by the University of Bristol, have developed a new type of screen display that not only moves but also physically tilts.

Researchers from the University’s Department of Computer Science will present the display, called Tilt Displays, at MobileHCI 2012, the world’s leading conference in the field of Human Computer Interaction (HCI), held in San Francisco, USA.

Tilt Displays is a display surface about half the size of a standard tablet, such as an iPad.  It consists of a collection of individual display components each of which can tilt along one or more axes and move vertically up and down. This ability to tilt along multiple axes distinguishes it from previous actuatable displays.

The researchers, through a mobile 3x3 custom built prototype, examined the design space around Tilt Displays, to understand users’ initial impressions and looked at how users may interact with these surfaces.  They were also interested in the use of a mobile display, because of the range of opportunities for its use it offers.

Sriram Subramanian, Professor of Human-Computer Interaction in the Department of Computer Science’s Interaction and Graphics group and co-chair of the MobileHCI 2012 conference, said: “The ability to tilt along multiple axes distinguishes our display from previous actuatable displays.  Such screen versatility opens a range of opportunities for providing an additional integrated information channel to the user.

“These opportunities include collaboration, terrain modeling, 3D video that is beyond auto-stereoscopic 3D and tangible gaming. We can imagine many scenarios that would benefit from the physicality offered by Tilt Displays. However, we need to establish whether users can relate to the new experiences and advantages of using such a device.”

The research found participants were very positive about the Tilt Display concept.  Their first impression was to associate Tilt Displays to a new method of presenting and consuming 3D content and they linked the Tilt Display to other forms of 3D displays, such as those used in cinema.

The second user study examined two interaction possibilities, one for manipulating the surface of the Tilt Display and the second for conducting everyday interactions.

A set of six gestures were employed to control all facets of tilt and actuation. The second set, for the low-level interactions of panning, scaling, rotating and selection, found that users preferred on-screen gestures for planar surfaces, but mid-air versions of the same gestures for non-planar configurations. This demonstrates users’ ability to ‘scale up’ their knowledge of gestures to the domain of Tilt Displays.

A video of Tilt Displays is available on YouTube.

The MobileHCI series provides a forum for academics and practitioners to discuss the challenges and potential solutions for effective interaction with mobile devices and services. It covers the design, evaluation and application of techniques and approaches for all mobile and wearable computing devices and services.

Bristol Interaction and Graphics (BIG), based in the University of Bristol’s Department of Computer Science, is united by a common interest in creative interdisciplinarity. BIG acts as a hub for collaboration between social scientists, artists, scientists and engineers to combine efficient and aesthetic design. The group is particularly interested in areas which couple the design of devices with deployment and evaluation in public settings. Members of the group have expertise in research areas spanning human-computer interaction, visual and tactile perception, imaging, visualisation and computer-supported collaboration.