Neutron scattering explains how myoglobin can perform without water 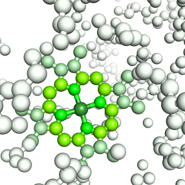 Proteins do not need to be surrounded by water to carry out their vital biological functions, according to new research published in the Journal of the American Chemical Society. The findings, led by scientists from the University of Bristol, the Institut de Biologie Structurale (IBS) in Grenoble, the Australian National University, the Institut Laue Langevin and the Jülich Centre for Neutron Science, will help towards the potential application of proteins in biochemical gas sensors or in state-of-the-art wound dressing.

Proteins do not need to be surrounded by water to carry out their vital biological functions, according to new research published in the Journal of the American Chemical Society. The findings, led by scientists from the University of Bristol, the Institut de Biologie Structurale (IBS) in Grenoble, the Australian National University, the Institut Laue Langevin and the Jülich Centre for Neutron Science, will help towards the potential application of proteins in biochemical gas sensors or in state-of-the-art wound dressing.

Using a state-of-the-art neutron scattering technique the team were able to demonstrate that when myoglobin - an oxygen-binding protein found in the muscle tissue of vertebrates - is enclosed in a sheath of surfactant molecules, it moves in the same way as when it is surrounded by water. These motions are essential if a protein is to perform its biological function, and these findings make proteins a viable material for use in new wound dressings or even as chemical gas sensors.

Water is the natural environment for soluble proteins and is an integral part of their structures which allows them to carry out their specific function. For many years it has been perceived that proteins required water or another solvent in order to function. In 2010, the Bristol team proved that by grafting polymer chains onto the protein surface, it was possible to produce solvent- and water-free myoglobin liquids that could still perform their biological roles. Scientists have now demonstrated that protein dynamics is the reason why.

Myoglobin is common to almost all mammals and responsible for the red colour of raw meat. Like all soluble proteins, its surface is covered with water molecules. In this study, the researchers wanted to assess whether the protein structure could still move and continue to bind oxygen if all the water was completely removed and replaced by synthetic molecules.

The team analysed three samples, a wet sample (the protein in water), a dry sample (the dehydrated protein) and a dry protein-polymer hybrid sample where the water molecules had been replaced by synthetically crafted polyethylene glycol-based polymer surfactant molecules. Using a technique called incoherent neutron scattering at the Institut Laue Langevin (ILL) in Grenoble, France, and at the Jülich Centre for Neutron Science at FRMII, Garching, Germany, the team was able to monitor the motions in the protein and in the polymer surfactant separately. This separation has been made possible by specific labelling, carried out in a dedicated deuteration laboratory at the ILL, by which either polymer or protein motions are masked by replacing hydrogen with its heavier isotope, deuterium.

What they found was that the myoglobin molecules surrounded by polymer moved just as well as the wet sample, and that the dry sample had very little mobility. Knowing that proteins can function outside of water opens them up to use in real life applications because it shows that there are other alternatives if water is unavailable. Examples of where they could be used include biochemical gas sensors, as myoglobin can bind carbon monoxide molecules.

Another potential application is in the development of new wound dressings, where the liquid protein could be applied either internally and externally to the wound to reduce healing time by supplying oxygen or other essential chemicals to the damaged tissue.

Dr Adam Perriman of the University of Bristol’s School of Chemistry said: “These discoveries have increased our fundamental understanding of proteins and how they behave, which could create many new opportunities for their application in industrial processing and in medical technologies. The fact that our proteins can happily perform their function outside of water, a substance generally thought to be vital for life, really drives home just how robust these biological nanomachines are."

Martin Weik of the Institut de Biologie Structurale explained: “Neutron scattering techniques are excellent for studying the dynamics of proteins and of their environment. The world-class neutron scattering facilities at the ILL and the FRM II allow us to analyse how proteins move, thus complementing the single snapshots of their structures provided by crystallography.”

Earlier this month, Martin Weik and colleagues from the IBS, the ILL, the University of California, the Australian Institute of Science and Technology Organisation and the Jülich Centre for Neutron Science at FRMII, applied these techniques to an intrinsically disordered protein (IDP) called tau, to try and understand how its flexibility and its interactions with water differ from ordered proteins such as myoglobin.

They found that the coupling of the disordered tau protein with water motions was much tighter than for folded proteins. IDPs are of significant interest in a medical context because they can aggregate and cluster together to create the amyloid fibrils behind neuro-degenerative diseases such as Parkinson's and Alzheimer's. Whilst the ordered structure of folded proteins makes it possible to develop drugs that fit into the protein like a key in a lock, the conformational variability of an intrinsically disordered protein like tau makes it more difficult.  A more in-depth understanding of their dynamics is required and the discovery of tight coupling with water motions is a significant step forward.