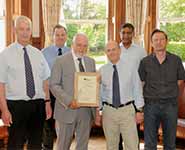 The Stunning and Slaughter Group at the University of Bristol’s School of Veterinary Sciences is the winner of the 2012 ‘HSA John Ace-Hopkins Award for Significant Advances in Humane Slaughter’.

The award, which recognises individuals or organisations that have made significant scientific, technical or other advances that have led to improvements in the humane slaughter of livestock, was won by the Stunning and Slaughter Group at the University of Bristol’s School of Veterinary Sciences.

This year, in honour and memory of John Ace-Hopkins who won the award in 2011 and who died in November 2011, the award was named the HSA John Ace-Hopkins Award for Significant Advances in Humane Slaughter and was presented to the Stunning and Slaughter Group at the Veterinary School at Langford last Thursday, 19 July.

For over 15 years the group, led primarily by Dr Mohan Raj, have investigated the design and operation of the poultry waterbath stunner and initially developed the use of controlled atmosphere (CA) systems, which offered an alternative to the traditional multi-bird electrical waterbath stunner.

Dr Becky Whay, Head of the Animal Welfare and Behaviour Group at the University of Bristol’s School of Veterinary Sciences, said: “I am delighted the group have been recognised with this award for their work, especially as Drs Raj and O’Callaghan have recently retired after a lifetime’s work in this field.

“The group’s research has led to a high welfare alternative through the use of both CA and an electrical alternative that has real potential for the future.”

One example of the group’s contribution is their research into controlled atmosphere methods that has paved the way for the commercial development of gas slaughter systems for poultry. Although these have welfare advantages over electrical waterbath methods, as the birds do not need to be handled or shackled, electrical systems are likely to remain in use, and the group has undertaken key research into assessing the efficacy of electrical stunning and into various welfare refinements for this method.

In addition to its research, the group has played a major role in training and promoting good practice for welfare through the Masters degree in Meat Science and Technology and the Animal Welfare Officer training courses at Bristol, and through its contributions to the Farm Animal Welfare Committee (FAWC) and European Food Standards Authority (EFSA) scientific reviews that have helped shape legislation.

About the Humane Slaughter Association (HSA)

As an independent registered charity, the HSA is unique in working exclusively to achieve the highest worldwide standards in food animal welfare at markets, during transport and at slaughter through scientific and technical advances, education and training. Its work includes researching, refining and demonstrating humane slaughter methods, publishing material such as guidelines, best practice, books and videos, funding research projects and the development of equipment. Specialist technical staff provide expert and practical advice on all welfare issues relating to food animals.

The HSA is funded by voluntary donations, subscriptions and legacies.