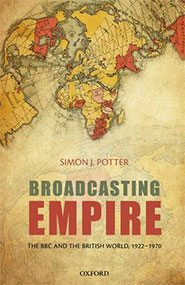 A new book exploring the relationship between the BBC and the British empire is published today by Dr Simon Potter in the Department of Historical Studies at the University of Bristol.

Based on eight years of archival research, and drawing on new evidence from collections in Britain, Canada, Australia, New Zealand, and the USA, Broadcasting Empire: The BBC and the British World, 1922-1970 introduces an important new perspective to the study of British broadcasting, and contributes to current debates about the legacies of empire and the shaping of Britishness and British culture.

Dr Potter said: “The BBC has been broadcasting to listeners overseas for eighty years now: the World Service has recently been in the news, with its move from Bush House to Broadcasting House.  But at the beginning, long before the World Service, the BBC ran what it called the Empire Service.  The BBC started its overseas operations in 1932, well before the sun had set on the British empire.  Radio seemed to be a technology that could help keep the empire united in the face of foreign rivals and internal dissent.

“In the 1930s and 1940s, the BBC wanted to link Britons at home with ‘overseas Britons’, people of British birth or descent in Canada, Australia, New Zealand and South Africa.  In the 1950s it tried to use radio to encourage colonial economic development and education in Africa and Asia, and also to perpetuate the British imperial presence.  Hugh Carleton Greene, Graham Greene’s brother and later the BBC’s Director General, followed up his wartime radio propaganda operations against Nazi Germany with a stint in Malaya, heading up the broadcasting side of the British ‘hearts and minds’ counterinsurgency operations.  It was only during the 1960s, as Britain hastily withdrew from its empire, that the BBC staged its own imperial retreat.

“If you’ve seen the film of The King’s Speech you’ll be aware that, from a very early stage in its history, the BBC worked with the monarchy to strengthen a sense of British national identity.  But the BBC also made this connection with royalty in its broadcasts to the empire.  The first royal Christmas message, read by King George V in 1932, was for the empire as much as it was for people in Britain.  It was written by Rudyard Kipling, and addressed people who, in Kipling’s words, were ‘so cut off by the snows, the desert or the sea, that only voices out of the air can reach them’. On a more everyday basis, from the 1930s onwards, the BBC broadcast British music, drama, sport and comedy as a means to project British culture overseas, and to promote British cultural connections with the empire.“

Broadcasting Empire is the first full-length, scholarly study to examine both the home and overseas aspects of the BBC's imperial mission.  The book also makes an important contribution to our understanding of the transnational history of broadcasting, emphasising rivalries between British and American attempts to exert influence on the world's radio and television systems.

Dr Potter is now leading a collaborative project, funded by the University, examining how empire has been commemorated and memorialised in Bristol, across Britain, and in other countries too.

Dr Simon J. Potter is Reader in Modern History at the University of Bristol.  He is the author of News and the British World: the Emergence of an Imperial Press System, 1876-1922 (2003), and has published widely on the history of the press and broadcasting in the British empire.  He was formerly a Government of Ireland Research Fellow, a Rydon Fellow at the Menzies Centre for Australian Studies, London, and a Harold White Fellow at the National Library of Australia.