Grant to revolutionise the semiconductor laser 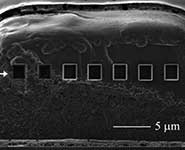 Dr Martin Cryan, Senior Lecturer in the University's Department of Electrical and Electronic Engineering, has been awarded a grant by the EPSRC to develop a new type of nanoscale lens technology.

Dr Martin Cryan, Reader in Applied Electromagnetics and Photonics in the Department of Electrical and Electronic Engineering at the University of Bristol, in collaboration with Dr Geoff Nash of the University of Exeter, have been awarded the grant by the EPSRC to develop a new type of nanoscale lens technology.

The optical lens has been in use for many hundreds of years and uses refraction to focus light to a point.  This project will use a radical new approach based on what are known as nanoantennas or optical antennas.

In recent years researchers around the world have realised that this same principle can apply to light which is part of the same electromagnetic spectrum as radio waves, but with a wavelength about 100,000 times smaller.

The researchers will use arrays of nanoscale optical antennas to focus and steer light by controlling the time delay at each of the antennas.  This is known as a Phased Array antenna and has been in use in radio antennas for many years.

The project will integrate these nanoantenna arrays on to the facets of semiconductor lasers to enable electronically controlled focusing and steering of light beams, which could dramatically reduce the cost of many laser based applications including medical sensors and optical communications systems.

The University of Bristol have been awarded £412,176 by the EPSRC for the three-year project, Integrated Tunable Flat Lenses (TuneFuL). The project started on 17 May 2012 and will end on 16 May 2015.

The University of Exeter have been awarded £233,289 by the EPSRC for the three-year project, Integrated Tunable Flat Lenses.