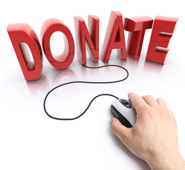 Online fundraising is a major source of income for many charities. A new study has looked at the extent to which people giving in this way are influenced by how much other people have given on the website before them.

Online fundraising is a major source of income for many charities. A new study has looked at the extent to which people giving in this way are influenced by how much other people have given on the website before them.

The University of Bristol study found that donors were strongly influenced by how much other people had given. One donation of £100 typically shifts average donations from £20 to £30. The effects also appear to be fairly persisent, lasting at least up to 20 donations after. Similarly, a single small donation to a website lowers the amounts that are subsequently given by around £5.

Professor Sarah Smith, author of the study from the University’s Centre for Market and Public Organisation, said: “I don’t think it will surprise many people to learn that donors are influenced by their peers. What is interesting is the sheer scale of the effect – and the fact that it can be negative as well as positive. This could be helpful to professional and individual fundraisers in thinking about how to maximise the amount of money they raise.

“Looking at online fundraising also gives us some insight into the psychology of giving. It isn’t as simple as donors competing to be the most generous – or avoiding being the meanest. Instead, it looks like they are trying to find what they think is the right level for them personally, compared to their peers.”

The research, carried out by the Centre for Market and Public Organisation (CMPO) at the University of Bristol, was funded by the Leverhulme Trust and the Economic and Social Research Council (ESRC).

The Centre for Market and Public Organisation (CMPO) is a leading research centre based at the University of Bristol, combining expertise in economics, geography and law. The Centre’s objective is to study the intersection between the public and private sectors of the economy, and in particular to understand the right way to organise and deliver public services. The Centre aims to develop research, contribute to the public debate and inform policy-making. CMPO started its second five years as an ESRC Research Centre in October 2009. The Centre was established in 1998 and became an ESRC-funded Research Centre in 2004.

The Economic and Social Research Council (ESRC) is the UK's largest organisation for funding research on economic and social issues. It supports independent, high quality research which has an impact on business, the public sector and the third sector. The ESRC's total budget for 2012/13 is £205 million. At any one time the ESRC supports over 4,000 researchers and postgraduate students in academic institutions and independent research institutes. More at www.esrc.ac.uk

The Leverhulme Trust was established in 1925 under the Will of the first Viscount Leverhulme. It is one of the largest all-subject providers of research funding in the UK, distributing funds of some £60 million every year. For further information about the schemes that the Leverhulme Trust fund visit their website at www.leverhulme.ac.uk / www.twitter.com/LeverhulmeTrust