The incredible history behind one of Bristol’s hidden gems 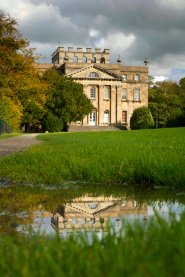 Work commenced on the building of the splendid Georgian Mansion House on 17 June 1712, a special date which will be celebrated on Saturday [16 June] by the University of Bristol and Kings Weston Action Group who are inviting the public along to share their memories of the historic house, parkland and the surrounding area.

The ground floor of Kings Weston House will be open to the public for the Know Your Kings Weston event, which takes place between 10am and 4pm and is an opportunity for people to bring along any mementoes, photos and memorabilia which will help contribute to the area’s fascinating history.

There will be an exhibition about the lost history of the estate and short tours of the gardens throughout the day. Researchers from the University will be on hand to record your memories and there will be a demonstration of some archaeology survey techniques in the grounds during the morning.

The historic estate, which today still covers over 200 acres of publicly accessible parkland, developed around an earlier Tudor manor. The present house was built to the designs of Sir John Vanbrugh, one of Britain’s greatest architects, and construction began three centuries ago. Shirehampton, Sea Mills, Avonmouth and Lawrence Weston were all once key parts of the Kings Weston story.

Professor Mark Horton, from the University of Bristol, said: “Kings Weston House, designed by Sir John Vanbrugh, is one of the most important examples of 18th century architecture in the city. We hope that lots of people will come along and learn about the house and its important landscapes, and contribute their own memories to help build on our existing knowledge of the social history of Kings Weston and Shirehampton area.”

Saturday’s event is part of the Know Your Bristol project, run by the University of Bristol in partnership with Bristol City Council and local community organisations to celebrate local community heritage.

It’s a hands-on history project which explores some of the city’s best-loved and most intriguing places. It has been funded by the Arts and Humanities Research Council as part of the Connected Communities Programme.

The history of Kings Weston House:

The house remained in the Southwell family until it was sold in 1833. When the new owner Philip John Miles died in 1845, his estate was worth more than a million pounds, making him Bristol’s first recorded millionaire. The Miles Family financed the construction of all three of Brunel’s great steamships (including the ss Great Britain) as well as being responsible for building Avonmouth docks and developing numerous new industries and railway lines within the city during the Victorian era.

During the First World War, the house was converted into a hospital before being sold again in 1937. It later housed military during the Second World War.

Following the war, the house had various educational uses until 1970 when the Bristol Corporation purchased the house for £305,000 to set up a Police Training Centre.

The future of Kings Weston House looked very uncertain when Avon & Somerset Police left for their new premises at Portishead in 1995. It was boarded up to stop vandalism and lay neglected and desolate for five years.

The new millennium brought with it a new lease of life when the house, with the interior of the house restored to its former glory.

In 2001, Kings Weston House was re-opened by the present owner John Hardy, with the ground floor used as a venue for both business and private events, the first and second floors let as serviced offices and a Tea Shop opening in one of the vaulted rooms on the lower ground floor.