The Bristol Dinosaur comes to life in drawing competition 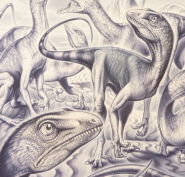 Budding artists have drawn what they think Bristol’s very own dinosaur looked like, with their efforts being judged by the world’s leading dinosaur illustrator Luis Rey. The Bristol Dinosaur Project, based at the University of Bristol, asked entrants from around the world to recreate the Thecodontosaurus – affectionately known as Theco – who was only the fourth dinosaur to be discovered in the world.

The Bristol Dinosaur Project, based at the University of Bristol, asked entrants from around the world to recreate the Thecodontosaurus – affectionately known as Theco – who was only the fourth dinosaur to be discovered in the world.

There were over 60 entries for the 2012 Bristol Dinosaur International Illustration Competition, some from as far afield as Italy and the USA.

Around 60 guests attended an awards ceremony last night [31 May] held in the Wills Memorial Building, including local brownies, schools, local and foreign artists.

Ideas about what the Bristol dinosaur, discovered in 1834 near Bristol Zoo, looked like are changing all the time as paleontologists find out more about its bones which are held at the University of Bristol and Bristol Museum and Art Gallery.

With the help of some online tips and clues, children and adults were invited to draw their own version of Theco. The winning pieces will be used to show people what the dinosaur looked like through the project’s public engagement programme.

The winners in the five categories were:

Ed Drewitt, learning officer for the Bristol Dinosaur Project, said: “We wanted as many people in the UK and beyond to draw the Westcountry’s very own dinosaur so we can show people what life was like 210 million years ago.”

The winners will receive a guided tour of the brand new Bristol Dinosaur Project Palaeo Lab, a handcrafted replica of a Thecodontosaurus bone and their artwork will be displayed in the Wills Memorial Building.

Pedro Viegas, fossil preparatory for the project, added: “The quality of artwork has been excellent. We now have some great illustrations to show people what the Bristol dinosaur really looked like.”

Luis Rey, a Spanish-Mexican artist and illustrator well-known for his elaborate and colourful work within the field of palaeoart, was also one of the judges.

Luis, who has worked on the BBC’s Walking with Dinosaurs series, said: “I saw Theco in every illustration which I picked as a winner.”

Infant Category up to seven years: