New books tell the story of engineering and bridge building 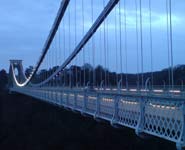 Two books, one examining the nature and practice of engineering and another on the story of bridges beyond science and technology are published by an engineer at the University of Bristol.

Engineering: A very short introduction by Professor David Blockley, explores the nature and practice of engineering, its history, its scope, and its relationship with art, craft, science, and technology.

Professor Blockley considers the role of engineering in the modern world, demonstrating its need to provide both practical and socially acceptable solutions, and explores how engineers use natural phenomena to embrace human needs.

From its early roots starting with Archimedes to some of the great figures of engineering such as Brunel and Marconi, right up to the modern day, he also looks at some of its challenges - when things go wrong - such as at Chernobyl. Ultimately, he shows how engineering is intimately part of who and what we are.

Bridge building is a magnificent example of the practical and every day use of science. However, the story of bridges goes beyond science and technology, and involves issues relating to artistic and cultural development. After all, bridges are built by people, for people. Bridges can be icons for whole cities; just consider New York’s Brooklyn Bridge, London’s Tower Bridge, and Sydney’s Harbour Bridge. Such bridges can be considered functional public art, as they have the power to delight or be an eyesore.

Bridges: The science and art of the world’s most inspiring structures explains how to read a bridge, in all its different forms, design, and construction, and the way the forces flow through arches and beams. Professor Blockley combines the engineering of how bridges stand up with the cultural, aesthetic, and historical importance they hold. Drawing on examples of particular bridges from around the world, he also looks in detail at the risk engineers take when building bridges, and examines why things sometimes go wrong.

Bridges: The science and art of the world’s most inspiring structures is published by Oxford University Press, priced at £10.99 [paperback].

Both books are suitable for the general reader without any specialist knowledge and students thinking of studying science or engineering.