University torchbearers have their moment to shine 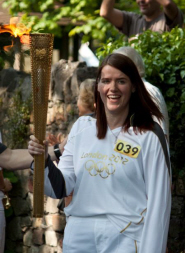 With cheering crowds, bright sunshine and an abundance of Union Jacks, the University of Bristol’s proud torchbearers say their memories of carrying the Olympic flame through the packed streets of Bristol will last a lifetime.

The torchbearing trio, who were selected by the University, described the once-in-a-lifetime opportunity as ‘overwhelming’ thanks to the support from the public along the route.

Georgie Twigg, who was last week named in the GB ladies hockey team for the Olympic, said: "It was an absolutely amazing day. I just couldn't believe how many people were there - it was beyond belief. I was in a bus behind the procession from the start of the day which really added to the anticipation and nerves.

"It was such an adrenaline rush and showed how everyone's going to get behind Team GB for the Olympics. What's so great about the relay is that it's generating such a buzz around the Games and the whole country's united in its excitement."

After the hype of the torch relay, it was straight to the gym and hockey training for Georgie, who is juggling her final year law exams with preparations for the Olympics.

Shirley Hume, 61, was nominated by fellow staff members for her sporting achievements, dedication to her students and bravery in overcoming skin cancer.

Past students were able to watch her moment of glory live on the internet from around the world.

“The whole atmosphere was just so inspirational. What I will take away with me is the goodwill and enthusiasm of the crowd. There was something decidedly British about people getting up early in the morning to cheer on a stranger who was carrying a flame past them in the blink of an eye.

“I remember seeing people from the office and my family but apart from that it was just a blur of sights and sounds. I had to come back to work and invigilate an exam in the afternoon, but turned up in my uniform and took the torch along for the students to see first!”

Georgie passed the flame to PhD student Bettina Urban, 28, who was jointly nominated to be a torchbearer by the Students’ Union and Bristol University in recognition of her voluntary work.

Bettina, who has been volunteering extensively since she started studying for her PhD in Dynamic Cell Biology in 2008, said: “Carrying the torch yesterday was one of the most exciting experiences ever. The amount of people who came to see the torch and cheer us on was unbelievable and truly magical. It was the perfect day and I feel honoured to have been part of such an epic event."