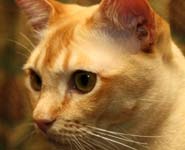 A genetic test for an inherited disease in Burmese cats, called Burmese hypokalaemia, has been developed thanks to the identification of the genetic mutation responsible for the disease by a research team, including academics from the University of Bristol's School of Veterinary Sciences.

Now, thanks to the identification of the genetic mutation responsible for the disease by a research team, including academics from the University of Bristol, a genetic test has been developed.

The clinical presentation of the genetic disease, also known as Familial Episodic Hypokalaemic Polymyopathy, is skeletal muscle weakness, which is episodic in nature and can affect the whole animal or may be localised to the neck or limb muscles. As a result affected cats tend to have problems walking and holding their head correctly.

The new genetic test for Burmese hypokalaemia allows cat breeders, owners and veterinarians to test for this disease and has been launched by Langford Veterinary Services Ltd (LVS), a totally owned subsidiary of the University of Bristol. Currently the Molecular Diagnostic Unit within LVS is the only genetic testing laboratory in the world offering this genetic test.

Burmese hypokalaemia is an autosomal recessive disease, which means that carrier cats do not show signs of disease.  However, mating two cats carrying the mutation has a 25 per cent chance of producing kittens that will be affected by the disease.

Dr Chris Helps, Head of the Molecular Diagnostic Unit at LVS, said: “It is possible to continue to use carrier cats in breeding programmes to retain important breeding lines and to avoid reducing the size of the Burmese gene pool. As long as carrier cats are mated to normal cats, no affected kittens will be produced.  This mating is likely to produce kittens that are carriers, which can be identified by genetic testing and, if necessary, future matings arranged with normal cats.”

The identification of the Burmese hypokalemia mutation has enabled the research team to develop a genetic test, which, by genetic testing and selective breeding, could be used to eradicate the disease in the Burmese breed.

Clinical signs in cats affected by the disease can usually be managed by adding potassium supplements to their diet.  In some affected cats clinical signs disappear when they get to one- to two-years-old without the need for further treatment.

The research team, consisting of veterinarians and geneticists, who identified the genetic mutation responsible for Burmese hypokalaemia are from the University of Bristol’s School of Veterinary Sciences and Langford Veterinary Services, UC Davis, University of Sydney, Massey University and Justus Liebig University.

Langford Veterinary Services (LVS) is a customer focused veterinary business providing an extensive range of specialist capabilities and a superior quality of care. All clinics are supported by highly specialised clinicians, diagnostic imagers, anaesthetists, nurses and other support staff.

Langford Veterinary Services is a totally owned subsidiary of the University of Bristol.