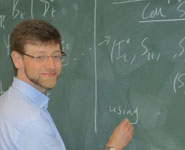 Dr Clive Bowsher, Lecturer at the School of Mathematics, and Professor Peter Swain at Synthetic and Systems Biology Edinburgh co-authored a paper in the Proceedings of the National Academy of Sciences showing how to separate ‘signal’ from ‘noise’ when studying the mechanisms of living cells.

Cells make decisions in fluctuating environments using inherently noisy biochemical mechanisms. Such effects create considerable, unpredictable variation – known as ‘stochasticity’– both over time and between genetically identical cells. To understand how cells exploit and control these biochemical fluctuations, scientists must identify the sources of stochasticity, quantify their effects, and distinguish variation that carries information about the biological environment from confounding noise.

In their PNAS paper, Dr Bowsher and Professor Swain show how to decompose the fluctuations of biochemical networks into multiple components and how to design experimental ‘reporters’ to measure these components in living cells.

‘The mathematics provides variance decomposition techniques for dynamic systems,’ said Dr Bowsher. ‘We were able to make rigorous connections between the concept of intrinsic noise in systems biology, the notion of information capacity used in communications engineering, and a correlation ratio introduced in the 1950s by Alfréd Rényi. We constructed a generalised signal-to-noise measure from the variance components to quantify the efficacy of information flow through a biochemical network.’

The paper, which describes the application of this approach to yeast cells, shows that the majority of cellular variation may be informational in origin and due to fluctuations in the cellular environment. The results pave the way to a better understanding of the dynamics of signal processing and decision-making by cells.

‘As we understand better how cells respond to their environments, we will be better placed to control their behaviour in situ,’ said Dr Bowsher, ‘for example enabling the delivery by synthetic cells of drugs to the right place in the body at the right time.’