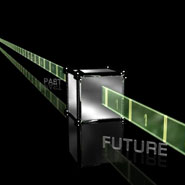 A simulator for a stochastic process can be thought of a physical system that stores select information about past outputs, and uses them to generate the require statistics for the future

Simulations of reality would require less memory on a quantum computer than on a classical computer, new research from scientists at the University of Bristol, published in Nature Communications, has shown.

The study by Dr Karoline Wiesner from the School of Mathematics and Centre for Complexity Sciences, together with researchers from the Centre for Quantum Technologies in Singapore, demonstrates a new way in which computers based on quantum physics could beat the performance of classical computers.

When confronted with a complicated system, scientists typically strive to identify underlying simplicity which is then articulated as natural laws and fundamental principles.  However, complex systems often seem immune to this approach, making it difficult to extract underlying principles.

Researchers have discovered that complex systems can be less complex than originally thought if they allow quantum physics to help: quantum models of complex systems are simpler and predict their behaviour more efficiently than classical models.

Other systems are quite different, for example neural spike sequences (which indicate how sensory and other information is represented in the brain) or protein conformational dynamics (how proteins – the molecules that facilitate biological functions – undergo structural rearrangement).  These systems have memory and are predictable to some extent; they are more complex than a coin toss.

The operation of such complex systems in many organisms is based on a simulation of reality.  This simulation allows the organism to predict and thus react to the environment around it.  However, if quantum dynamics can be exploited to make identical predictions with less memory, then such systems need not be as complex as originally thought.

Dr Wiesner added: “On a more fundamental level, we found that the efficiency of prediction still does not reach the lower bound given by the principles of thermodynamics – there is room for improvement.  This might hint at a source of temporal asymmetry within the framework of quantum mechanics; that it is fundamentally impossible to simulate certain observable statistics reversibly and hence with perfect efficiency.”