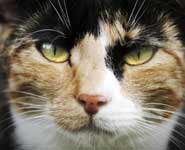 Figures released by Cats Protection, and backed up by a recent University of Bristol study, show an ever decreasing number of people coming forward to adopt cats, while the number of people needing to give up a cat or report a stray is on the rise.

Figures released today, and backed up by a recent University of Bristol study from the School of Veterinary Sciences, show an ever decreasing number of people coming forward to adopt cats, while the number of people needing to give up a cat or report a stray is on the rise.

This is the worst it has been for the UK’s leading feline welfare charity, Cats Protection, since the start of the recession, which has led to this plea for help.

“I cannot emphasise enough how serious this is,” said Peter Hepburn, Cats Protection’s Chief Executive. “The recession has been disastrous for the UK’s pets and, following the latest news of the UK entering a double dip recession, sadly the situation for cats shows no signs of improving.”

“These figures are just the tip of the iceberg because our 260 volunteer-run branches and 30 adoption centres all receive calls directly, which means the problem is much larger than we can demonstrate here. Our volunteers and staff regularly report that they are asked for help by owners who have to give their cats up for financial reasons, so I understand how tough it is for people at the moment.”

These latest figures raise serious concerns for animal welfare and are backed up by a recent University of Bristol study which estimated that 131,070 cats entered the care of UK welfare organisations during 2009, the first full year since the onset of the recession. Over 40 per cent of these were cared for by Cats Protection.

The charity has over 8,700 volunteers working round the clock to help as many cats as possible but with the number of unwanted cats increasing and the number of people calling to adopt cats dropping, the charity has been left with a backlog of cats in need of homes.

Cats Protection would like to urge people to contact them as soon as they become aware of the need to give up their cat because this will allow their branches and centres to prioritise and help as soon as they are able.

To adopt a cat, please call Cats Protection’s helpline on 03000 12 12 12 between 9am - 12.30pm or 2pm - 5pm Monday to Friday (excluding Bank Holidays). Alternatively, log on to www.cats.org.uk to find contact details for your local branch.

Every cat adopted from the charity will have been examined by a veterinary surgeon, microchipped, vaccinated, given flea and worm treatments, neutered if old enough and will also come with four week’s free pet insurance.

Cats Protection is the UK’s leading cat welfare charity and helps over 235,000 cats through a national network of 260 volunteer-run branches and 30 adoption centres.