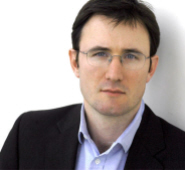 Epigram, the University of Bristol’s popular student-run newspaper, marks its 250th edition today [30 April] by celebrating some of its journalistic triumphs. A special edition of the paper features an interview with its first editor James Landale, who went on to become the BBC’s Deputy Political Editor, recalling how the first edition was created on just one computer in 1989.

A special edition of the paper features an interview with its first editor James Landale, who went on to become the BBC’s  Deputy Political Editor, recalling how the first edition was created on just one computer in 1989.

James Landale (BSc 1990 and MSc 1992) remembers how his first task as editor was to buy an Apple Macintosh and some desktop publishing software. He said: “We produced a rather awful four-page edition and handed it out to students at Freshers’ Week.  Slowly but surely we worked our way up from that, got a few ads and a few more pages.”

Epigram quickly became a hybrid of a serious newspaper and a magazine with student reviews and features. Highlights include a front page article headlines ‘MI5 wants you’ which reported on the recruitment of students in the Politics Department by an agent, suspected to be working undercover.

Growing apathy amongst students was reflected in the ‘What march?’ headline of issue 54 in 1990, which detailed how 4,000 students were protesting in London about cuts to student grants but none were from the University of Bristol.

The Geology Department expressed ‘shock and upset’ that the Russian Government was demanding a precious fossil back, prompting the headline ‘One of our dinosaurs is missing’ in issue 120 in 1997.

More light-hearted news stories centred on the antics of staff and students. One student sold her virginity online and another had a shot-gun wedding in Las Vegas, amongst other tales of extra-curricular exploits.

Times have changed since The Magnet’s first feature, an in-depth look at 'England and Rome' – a 10 page, Latin-prefaced scripture of a lecture complete with footnotes. Content soon became lighter and photos were added to attract readers’ attention, although it was to be 90 years before the photos were printed in colour.

The Bristol University College Gazette followed in 1908. It was an officious journal produced mostly by staff, but with some student contributions.

The Nonesuch – named after the scarlet flower known to be the floral emblem of Bristol - was to become the longest-standing University newspaper when it was founded in 1910. It was published once a term and news coverage was therefore more for commemoration than information.

Frustrated by the lack of real ‘news’, students launched Nonesuch News in 1945  which was printed 10 times a year with each issue costing £15 to produce and only making a grand total of £7 in sales.

Technology, coupled with harder news, helped the next publication to become a success. The Bacus was the first Bristol student publication to go weekly, although it could only be printed when the editor was able to find enough money and resources.

Politics led to its downfall in 1989 when the Students’ Union decided to withdraw its funding and set-up its own newspaper – and so Epigram was born.