Can social media detect the changes in public mood? 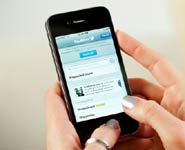 New research by academics at the University of Bristol’s Intelligent Systems Laboratory has analysed the mood of Twitter users in the UK and detected various changes in the mood of the public.

In particular, the researchers observed a significant increase in negative mood, anger and fear, coinciding with the announcement of spending cuts and last summer’s riots together with a possibly calming effect during the royal wedding.

The study by academics at the University of Bristol’s Intelligent Systems Laboratory is presented at the International Workshop on Social Media Applications in News and Entertainment (SMANE 2012) held in Lyon, France.

In this study the researchers focused on measuring the mood, and changes, using standard tools for mood detection, of a large sample of the UK population.  A collection of 484 million tweets generated by more than 9.8 million users from the UK were analysed between July 2009 and January 2012, a period marked by economic downturn and some social tensions.

The findings present intriguing patterns that can be explained when events and social changes are taken into account.  The researchers found that a significant increase in negative mood indicators coincided with the announcement of the cuts to public spending by the government, and that this effect is still lasting. They also detected events such as the riots of summer 2011, as well as a possible calming effect in the run up to the royal wedding. Intriguingly, a rise in public anger seems to have already been under way in the days before the riots.

Nello Cristianini, Professor of Artificial Intelligence, speaking about the research, said: “Social media allows for the easy gathering of large amounts of data generated by the public while communicating with each other.

“While we leave the interpretation of our findings to social and political scientists, we observed how the period preceding the royal wedding seems to be marked by a lowered incidence of anger and fear, which starts rising soon after that.  Of course, other events also happened in early May 2011, so they may also be responsible for that increase.”

The aim of the study was to see if the effects of social events could be seen in the contents of Twitter.  The first part of the researchers analysis provides a sanity check, in that it corroborates their assumption that word-counting methods can provide a reasonable approach to sentiment or mood analysis.

While this approach is standard in many applications, the researchers felt that a sanity check in the domain of mood detection via Twitter was necessary. By making use of lists of words that are correlated with the sentiments of joy, fear, anger and sadness, they observed that periodic events such as Christmas, Valentine’s Day and Halloween evoke the same response in the population, year after year.

The main part of the analysis focused on a visible change-point occurring in October 2010, when the government announced cuts to public spending, testing its statistical significance. The study shows that the change point is real, and that its effects can still be observed.  In other words, public mood has still not recovered from that announcement.

The same testing technique shows another important period, that of summer 2011, when riots broke out in various UK cities, leading to looting and even loss of life.  The researchers method seems to suggest that some increase in public anger preceded, and not followed, these events, although the significance of this finding is a matter for social scientists to discuss.

It is important to remark that the real-time detection of social trends via the analysis of social media content, presents various possible limitations.  Social media analysis can only be accomplished with text mining technologies, which are less accurate than human assessment, but can be applied to vast amounts of data. Also the population that is assessed is necessarily that of Twitter users, which is a biased subsample of the general population.  Particular care needs to be paid when extracting information but also when reporting it.

More information about this project, including images, a link to a demo website, and an animation of the data, can be found at mediapatterns.enm.bris.ac.uk/twittermood

An animation to show public sentiment, as a facial expression is available at mediapatterns.enm.bris.ac.uk/mood/

Paper: Effects of the recession on public mood in the UK, Thomas Lansdall-Welfare, Vasileios Lampos and Nello Cristianini, International Workshop on Social Media Applications in News and Entertainment (SMANE), accepted for publication March 2012.

Professor Nello Cristianini is supported by the Pascal2 network of excellence, and the Complacs F7 project.

The Intelligent Systems Laboratory (ISL) is in the Merchant Venturers School of Engineering.