Water, water everywhere – but is it essential to life? 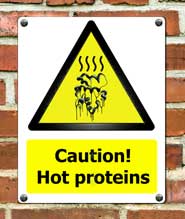 New research by scientists at the University of Bristol has challenged one of the key beliefs in chemistry: that proteins are dependent on water to survive and function. The team’s findings, published in Chemical Science, could eventually lead to the development of new industrial enzymes.

Proteins are large organic molecules that are vital to every living thing, allowing us to convert food into energy, supply oxygen to our blood and muscles, and drive our immune systems.  Since proteins evolved in a water-rich environment, it is generally thought that they are dependent on water to survive and function.

Proteins consist of one or more polypeptides – chains of amino acids held together by peptide bonds.  If a protein in water is heated to temperatures approaching the boiling point of water, these chains will lose their structure and the protein will denature (unfold).

A classic example of denaturing occurs when an egg is hard-boiled: the structures of the proteins in the egg unfold with temperature and stick together creating a solid.  In the egg’s case, this process cannot be reversed – however there are many examples where cooling the protein results in refolding of the structure.

Previously, it was thought that water was essential to the refolding process, however the Bristol findings suggest this isn’t necessarily the case.

Using a spectroscopic technique called circular dichroism, Dr Adam Perriman of Bristol’s School of Chemistry and colleagues have shown that the oxygen-carrying protein myoglobin can refold in an environment that is almost completely devoid of water molecules.

Dr Perriman said: “We achieved this by attaching polymer molecules to the surface of the protein and then removing the water to give a viscous liquid which, when cooled from a temperature as high as 155°C, refolded back to its original structure.

“We then used the Circular Dichroism beamline (B23) at Diamond Light Source, the UK’s national synchrotron science facility in Oxfordshire, to track the refolding of the myoglobin structure and were astounded when we became aware of the extremely high thermal resistance of the new material.”

These findings could pave the way for the development of new industrial enzymes where hyper-thermal resistance would play a crucial role, in applications ranging from biosensor development to electrochemical reduction of CO2 to liquid fuels.