How the Earth grew, 3 billion years ago 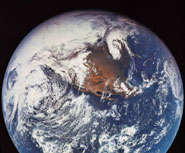 The growth rate of the Earth’s continental crust was high during the first 1.5 billion years of the planet’s history then decreased markedly for the next 3 billion years to the present day, according to new research from the University of Bristol, published in Science.

What is striking, and perhaps unexpected, is that there is increasing evidence that large volumes of continental crust were generated before 2.5 billion years ago.  Thus the distribution of rocks of different ages in the continental crust was very different back in time, because of the repeated interactions between the crust, and the convecting mantle from which the crust was generated.  As a consequence, the timing, rates and the geodynamical conditions of continental crust generation, destruction and reworking remain a topic of considerable debate.

To do this, Dr Bruno Dhuime of Bristol’s School of Earth Sciences with colleagues from the Universities of St Andrews and Portsmouth, studied the oxygen isotopic composition of zircons in the Earth’s crust using data generated at the Bristol Isotope Group and compiled from the literature.  The ages of zircon, a mineral commonly found in granitic rocks and in clastic sediments of various ages, can be determined to high precision, and these ages remain the basic chronological framework of the history of the Earth.

Dr Dhuime and his colleagues identified systematic variations in hafnium (Hf) and oxygen (O) isotopes in zircons that crystallised since 3.9 billion years ago.  These variations were used to calculate the balance between the generation of new crust and the reworking of old crust with time throughout Earth's history.

The results suggest that around 65 per cent of the present-day volume of the continental crust was already established by 3 billion years ago.  The comparatively low proportion of Archaean rocks still present on Earth's surface therefore implies the destruction and/or reworking of a large volume of the early crust.

This suggests that around 3 km3 of crust was added to the continental mass each year during the first 1.5 billion years of Earth's history.  This high growth rate then fell sharply during the next 3 billion years up to the present day ago with just 0.8 km3 of new crust added each year.

Dr Dhuime said: “Such a sharp decrease in the crustal growth rate about 3 billion years ago indicates a dramatic change in the way the continental crust was generated and preserved.  This change may in turn be linked to the onset of subduction-driven plate tectonics and discrete subduction zones as observed at the present day.  The next challenge is to determine which tectonic regime shaped the Earth's crust in the planet’s first 1.5 billion years – the Archean/Hadean eons – before this change.”

‘A Change in the Geodynamics of Continental Growth 3 Billion Years Ago’ by Bruno Dhuime, Chris J. Hawkesworth,  Peter A. Cawood,  Craig D. Storey in Science