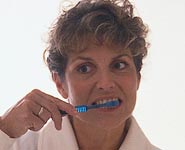 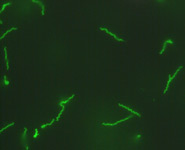 A new study by academics from the University of Bristol's School of Oral and Dental Sciences suggests stripping some mouth bacteria of their access key to gangs of other pathogenic oral bacteria could help prevent gum disease and tooth loss.

The study by academics at the University of Bristol’s School of Oral and Dental Sciences and published in the journal Microbiology, suggests that this bacterial access key could be a drug target for people who are at high risk of developing gum disease.

Oral bacteria called Treponema denticola frequently gang up in communities with other pathogenic oral bacteria to produce destructive dental plaque. This plaque, made up of bacteria, saliva and food debris, is a major cause of bleeding gums and gum disease. Later in life this can lead to periodontitis and loss of teeth. It is this interaction between different oral pathogens that is thought to be crucial to the development of periodontal disease.

The researchers have discovered that a molecule on the surface of Treponema called CTLP acts as the key pass that grants the bacterium access to the community, by allowing it to latch onto other oral bacteria. Once incorporated, CTLP in conjunction with other bacterial molecules can start to wreak havoc by inhibiting blood clotting (leading to continued bleeding of the gums) and causing tissue destruction.

Howard Jenkinson, Professor of Oral Microbiology in the School of Oral and Dental Sciences, who led the study, said that periodontal disease and bleeding gums are common ailments, affecting many groups of people, including the elderly, pregnant women and diabetics. “Devising new means to control these infections requires deeper understanding of the microbes involved, their interactions, and how they are able to become incorporated into dental plaque,” he said.

The study shows that CTLP could be a good target from which novel therapies could be developed. “CTLP gives Treponema access to other periodontal communities, allowing the bacteria to grow and survive. Inhibiting CTLP would deny Treponema access to the bacterial communities responsible for dental plaque, which in turn would reduce bleeding gums and slow down the onset of periodontal disease and tooth loss.” The team is now working to find a compound that will inhibit CTLP. “If a drug could be developed to target this factor, it could be used in people who are at higher risk from developing gum disease,” explained Professor Jenkinson.

The latest study backs up previous work in Professor Jenkinson’s lab on the workings of harmful oral bacteria.  “The overarching message from our latest study as well as previous work is that regular tooth brushing and maintaining a healthy mouth is vitally important to keep harmful mouth bacteria at bay,” he stressed.

The Society for General Microbiology is the largest microbiology society in Europe, and has around 5,000 members worldwide. The Society provides a common meeting ground for scientists working in research and in fields with applications in microbiology including medicine, veterinary medicine, pharmaceuticals, industry, agriculture, food, the environment and education.