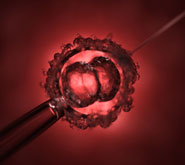 A dividing cell under a microscope.

Controversy exists over how many embryos should be implanted during assisted conception (in-vitro fertilisation/IVF) therapy. New research by the University of Bristol and published in the The Lancet shows that, while discretion can be applied in whether to implant one or two embryos, three or more should never be implanted into women of any age.

Controversy exists over how many embryos should be implanted during assisted conception (in-vitro fertilisation/IVF) therapy. New research by the University of Bristol and published in the The Lancet shows that, while discretion can be applied in whether to implant one or two embryos, three or more should never be implanted into women of any age.

Overall, the live birth rate was notably lower in older women than in younger women, irrespective of the number of embryos transferred, but in both age-groups transfer of two embryos led to a better live birth rate than did transfer of one embryo. However, in older women, the transfer of two embryos versus one was less likely to lead to multiple births, low birth weight, or preterm or severe preterm birth than in younger women (mostly because older women were less likely to maintain twin/multiple pregnancies).

They add: "In both age-groups, transfer of three embryos did not increase the live birth rate over that seen after transfer of two embryos, but was associated with an increased risk of adverse perinatal outcomes. We also found that the number of embryos successfully fertilised affected the outcomes, so that in a younger woman with only two or a small number of embryos successfully fertilised there may be a case for transferring two, rather than just one (as legislated in some countries currently). In view of these findings and previous findings, we conclude that no more than two embryos should be transferred into women of any age, but greater freedom should be given to clinicians and patients to decide whether to transfer one or two embryos, according to prognostic indicators, such as maternal age."

Finally both authors say: "Our results further highlight the importance of age with respect to the likely success of IVF. Couples need to understand that delaying childbirth until older ages of the mother may make it difficult to conceive and harder for IVF to be successful. For doctors seeing a new couple with infertility, moving to IVF sooner rather than later is key when for example the woman is 36 years of age than for example 26 years."

In a linked Comment, Dr Liv Bente Romundstad, Fertility Clinic, St Olavs University Hospital and Norwegian University of Science and Technology, Trondheim, Norway, says: "The final decision of whether to transfer one or two embryos should be based on a cooperative approach between embryologists and clinicians, although patients with medical or obstetric contraindications to twin pregnancies should receive no more than one embryo, irrespective of age or other prognostic factors."

She concludes: "Several strategies can be used to lower the risk of multiple births after assisted conception. The provision of information to patients and health-care providers is essential. Public funding to cover treatment costs can facilitate a reduction in the number of transferred embryos, and improvements in embryo freezing techniques will increase the cumulative pregnancy rate per cycle of oocyte retrieval. A combination of these factors will increase the likelihood that the outcome of interest will be achieved: one healthy baby at a time."

Media coverage of this study is available at the following URL: http://www.bris.ac.uk/news/2012/8158.html