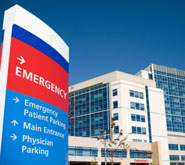 Mergers are unlikely to be the most effective way of dealing with poorly performing NHS hospitals, according to new research from the University of Bristol’s Centre for Market and Public Organisation (CMPO).

Mergers are unlikely to be the most effective way of dealing with poorly performing NHS hospitals, according to new research from the University of Bristol’s Centre for Market and Public Organisation (CMPO).

The study by Professor Carol Propper and colleagues finds that the wave of hospital consolidation in the late 1990s and early 2000s – in which around half the acute hospitals in England were involved in a merger – brought few benefits.

Poor financial performance typically continued, with hospitals that merged recording larger deficits post-merger than pre-merger. What’s more, the length of time people had to wait for elective treatment rose after the mergers. There was also no increase in activity per staff member employed in merged hospitals, and few indications of improvements in clinical quality.

At the time of the hospital consolidation, the rationale varied from place to place, but the main reasons were reducing excess capacity, returning hospitals to financial health and producing better outcomes for patients. The CMPO study indicates that just as in the private sector, mergers offer much before the event but fail to deliver on their promises.

The research has lessons for the regulation of NHS hospitals, as policy-makers seek to promote better care for patients and to establish an appropriate way of dealing with failing hospitals.

Professor Propper comments: "Our findings suggest that policies to reduce the scope for competition may not be beneficial for patients or taxpayers.

"Mergers reduce the scope for competition between hospitals. And we know from other recent research that – just as in the private sector – regulated competition may be beneficial in the NHS."

The CMPO researchers examine over 200 acute NHS hospitals in England between 1997 and 2006. Between these dates, around half of these 200 or so hospital trusts that existed in 1997 were involved in a merger.

The scale of the consolidation was such that the average number of hospitals in a local health economy fell from seven to five. The mergers were instigated by various parties, including local commissioners and the local strategic health authorities.

The study finds that hospital admissions fell by around 10 per cent four years after hospitals merged, but the number of staff fell by about the same amount. So per staff member employed there was no increase in activity.

Poor financial performance continued, so that hospitals that merged were making larger deficits post-merger than pre-merger. The length of time people had to wait for elective treatment rose post-merger, and there were few indications that clinical quality improved.

They find that mergers in areas where there was less capacity pre-merger were less likely to lead to reductions in activity, but also more likely to see no reduction in financial deficits.