How Harry Potter fans are bringing Quidditch to life in Bristol 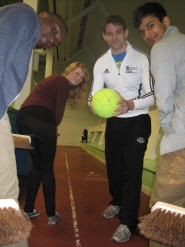 The magical world of Harry Potter is no longer confined to Hogwarts. In fact, the wizarding sport of Quidditch – broomsticks and all – has been brought to muggle life on the Downs thanks to keen Potter fans at Bristol University.

Quidditch, an exciting and often dangerous sport, features heavily in the popular books and matches have provided the backdrop for plenty of drama. It’s captured the attention of both book worms and sportsmen at the University, who have now established a weekly training session and hope to find other universities in the country who they can play against.

The unusual challenge is part of a wider initiative being run by the University to get more students taking part in sport. Other diverse activities being introduced as part of UBuACTIVE include dodgeball, Lacrosse, Korfball and Ultimate Frisbee.

The Harry Potter Society Wingardium Leviosoc is Bristol University’s largest society with more than 653 members, so Quidditch is proving a popular pastime.

Anna Harris, a second year biology student and chairman of the society, said: "When I started at the University I was disappointed to discover that there wasn't already a Harry Potter Society so, along with my friends Sophie Mitchell and Jade Read, we set it up and have been really promoting it this year.

"It's amazing to think we have over 600 members already and the introduction of Quidditch has been so popular. We're hoping to get even more people involved next year."

Muggle Quidditch is surprisingly similar to the wizard version, but minus the flying and spells. The playing field is a similar size to a football pitch with three circular goals placed on either side. Players are required to carry a broom between their legs at all times. Slightly deflated volleyballs usually act as the 'quaffle', and dodgeballs serve as the 'bludgers'.

While the 'snitch' is a magical object in the Harry Potter novels, in Muggle Quidditch the 'snitch' is simply a tennis ball contained in a sock tucked in the waistband of the snitch runner, who is a neutral player affiliated with neither team. He or she is dressed in all gold or yellow, and sometimes adorned with wings.

Ted Wilkes, Sports Participation Coordinator at Bristol University, said: “Because the Harry Potter Society had so many members we thought introducing Quidditch would be a great way to get people active and involved in the UBuACTIVE scheme.

“It’s actually a very energetic sport and has captured people’s imaginations, many of whom might not normally take part in sport. The first session was a lot of fun and we’re hoping to get around 30 people training each week. There’s a sense that Quidditch is about to take off as a sport in its own right and we hope to one day play against other Universities.”

UBuACTIVE is a joint initiative between the University of Bristol and the Students’ Union to provide exciting new sporting opportunities that are accessible to everyone.

Updates about UBuACTIVE can be found on the scheme’s Facebook page: www.facebook.com/ubuactive