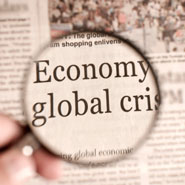 Research from the University of Bath and Bristol counters the claim that large bonuses in the banking industry are at the root of the global financial crisis.

Research from the University of Bath and Bristol counters the claim that large bonuses in the banking industry are at the root of the global financial crisis.

The study of executive pay found that although pay in the financial services sector is high, compared to other industries there is no evidence to support the argument that inappropriate incentive structures led banking executives to take excessive risks for short-term profits.

The suggested dependence of bonus payments on short-term corporate performance has led to the notion that bankers were over-incentivised to take risks, and was named as a factor behind the crisis in the Turner Report (commissioned by the government to make recommendations for regulatory reform in the banking industry).

To investigate this claim, researchers correlated directors’ pay in any year with the share price performance of the company in the same year, to see what the relationship was between pay and performance. They concluded that it was weak.

Professor Ian Tonks, from the University of Bath’s School of Management, said: “Following the crisis, a number of official reports have placed a lot of emphasis on curbing incentives, but in fact there is no evidence that incentive structures in banking were out of step with other sectors.

“Although pay in the financial services sector is high, the relationship between pay and performance in the run up to the financial crisis of 2007/08 was not significantly higher than in other sectors, and was generally quite low.

“It’s difficult to see how incentive structures in banks could be blamed for the crisis since there is little hard evidence that executive compensation of bankers depended on short-term performance: they were paid high salaries irrespective of bank profits.”

The research showed a stronger link between executive pay and firm size, implying that executives may be incentivised to ‘grow’ their company either by internal organic growth or acquisitions.

Professor Tonks added: “Of course it could be argued that the experience of the financial crisis has shown that banks are so important to the functioning of the global economy, that compensation packages should be less sensitive to performance than for non-financial firms.”

“I should emphasise that we are not trying to defend bankers’ pay; our argument is simply that any poor decisions made by bankers that led to the financial crisis were not made because of their incentive payment structures.”