Is chronic fatigue a major cause of school absence? 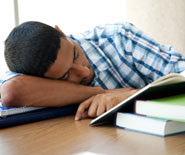 New research into the cause of school absence finds that up to one per cent of secondary pupils could be suffering from chronic fatigue. The study, led by academics at the University of Bristol is published today in the BMJOpen.

New research into the cause of school absence finds that up to one per cent of secondary pupils could be suffering from chronic fatigue. The study, led by academics at the University of Bristol is published today in the BMJOpen.

The study investigated the number of children affected by chronic fatigue in schools to identify pupils with undiagnosed Myalgic Encephalopathy [ME] or Chronic Fatigue Syndrome [CFS].

Using data from 2,855 children, aged 11- to 16-years enrolled at three secondary schools in England, the researchers worked with School Attendance Officers, identifying 461 pupils who had missed 20 per cent or more off school over a six-week term without a known cause, excluding those with a single episode off school, a known medical illness, or known to be truanting.

In 315 pupils, three were known to have CFS/ME and 42 were referred to a specialist clinic for full assessment and investigations. Of these, 23 were found to have CFS/ME. These children had been ill for an average of 22 months, and were missing over a third of school (on average). Overall, the study found that 28 (one per cent) from the 2,855 pupils enrolled were suffering from CFS/ME. All children identified were offered advice and treatment. Of 19 pupils followed up, six had fully recovered at six weeks and a further six at six months.

The findings show that chronic fatigue is an important cause of unexplained absence from school with fewer than one in five pupils with CFS/ME receiving a diagnosis or offered treatment. The study also found that children diagnosed at school are less severely affected than those referred to specialist services, and appear to make rapid progress when they are offered treatment.

Dr Esther Crawley, lead author and Consultant Senior Lecturer at the University’s School of Social and Community Medicine, said: “These findings reveal the scale of how many children are affected by disabling chronic fatigue that prevents them attending school, and how few are diagnosed and offered help.”

Previous studies show only 52 per cent of GPs feel confident in making the diagnosis in adults, let alone children. It is therefore likely that many children with CFS/ME remain undiagnosed and untreated, despite evidence that treatment is effective in children.

Dr Crawley added: “Our findings suggest that school-based surveillance for fatigue could be of potential benefit given that reduced school attendance is associated with worse educational attainment, and may increase the risk of unemployment. This approach, together with referral to specialist services, has the potential to reduce school absence and its harmful effects.“

The study, entitled ‘Unidentified Chronic Fatigue Syndrome (CFS/ME) is a major cause of school absence: school based surveillance study’ by Dr Esther Crawley, Professor Alan Emond and Professor Jonathan Sterne from the University of Bristol School of Social and Community Medicine, is funded by the Linbury Trust.

Media coverage from the study featured in the University in the Media.

About ME or CFS

Myalgic Encephalopathy [ME] or Chronic Fatigue Syndrome [CFS] can affect all types of people at any age. Symptoms include severe and debilitating fatigue, painful muscles and joints, disordered sleep, sore throats, swollen glands, poor memory and concentration. In many cases, people are housebound or confined to their bed for months or years, causing their lives to change drastically.