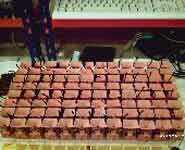 The Bristol Robotics Laboratory, a research partnership between the University of Bristol and UWE Bristol, will receive funding through Grand Challenges Explorations, an initiative created by the Bill & Melinda Gates Foundation that enables researchers worldwide to test unorthodox ideas that address persistent health and development challenges.

"We believe in the power of innovation—that a single bold idea can pioneer solutions to our greatest health and development challenges," said Chris Wilson, Director of Global Health Discovery for the Bill & Melinda Gates Foundation. "Grand Challenges Explorations seeks to identify and fund these new ideas wherever they come from, allowing scientists, innovators and entrepreneurs to pursue the kinds of creative ideas and novel approaches that could help to accelerate the end of polio, cure HIV infection or improve sanitation."

Projects that are receiving funding show promise in tackling priority global health issues where solutions do not yet exist.  This includes finding effective methods to eliminate or control infectious diseases such as polio and HIV as well as discovering new sanitation technologies.

Urine-tricity: electricity from urine, is a ground breaking project that aims to use a waste product – urine – with the evolving technology of Microbial Fuel Cells (MFCs) to produce electricity.  Dr Ioannis Ieropoulos, has worked with MFC technology for ten years, using it to generate power for autonomous robots.  This project aims to produce electricity from urine through stacks of small-scale Microbial Fuel Cells whilst at the same time cleaning the urine stream and getting rid of pathogens that may be found in urine.  Professor John Greenman, a microbiologist from UWE Bristol, will be part of the cross-disciplinary team working on the project along with Professor Chris Melhuish, Director BRL and Professor of Robotics and Autonomous Systems at the University of Bristol.

The process doesn't require energy to run, it is totally sustainable after the initial fabrication costs involved in producing the system.  This project, if successful, has the potential to achieve energy recovery from urine and other waste-streams, and produce a cleaner effluent, which is dischargeable into the environment without expensive waste water treatments in developing world countries.

Grand Challenges Explorations is a US$100 million initiative funded by the Bill & Melinda Gates Foundation.  Launched in 2008, Grand Challenge Explorations grants have already been awarded to nearly 500 researchers from over 40 countries.  The grant program is open to anyone from any discipline and from any organization.  The initiative uses an agile, accelerated grant-making process with short, two-page online applications and no preliminary data required.  Initial grants of $100,000 are awarded two times a year. Successful projects have an opportunity to receive a follow-on grant of up to US$1 million.

The Bristol Robotics Laboratory (BRL) is the largest multi-disciplinary robotics facility in the UK with an international reputation in advanced robotics research. The BRL mission is to understand the science, engineering and social role of robotics and embedded intelligence and to create autonomous devices capable of working independently, with each other, or with people. BRL is a collaborative research partnership with the University of Bristol and UWE Bristol (the University of the West of England, Bristol).
Please contact joanne.fryer@bristol.ac.uk for further information.