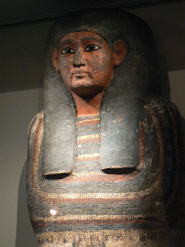 The extremely rare Egyptian coffin, possibly belonging to the son of a king Torquay Museum

An extremely rare Egyptian coffin, possibly belonging to the son of a king or a very senior official, has been ‘discovered’ at Torquay Museum by an archaeologist at the University of Bristol.

Dr Aidan Dodson, a senior research fellow in Bristol’s Department of Archaeology and Anthropology made the discovery while undertaking a long-term project to catalogue every single Egyptian coffin in English and Welsh provincial museums.

Dr Dodson said: “When I walked into Torquay Museum for the first time I realised that the coffin was something really special.  Not only was it of a design of which there is probably only one other example in the UK (in Bristol), but the quality was exceptional.

“Cut from a single log of cedar wood, it is exquisitely carved, inlaid and painted.  For a child to have been given something like that, he must have had very important parents – perhaps even a king and queen. Unfortunately, the part of the inscription which named the boy and his parents is so badly damaged that we cannot be certain.

“The inscription had been re-worked at some point for a new owner – a 2,500 year old mummified boy, anonymous but given the name Psamtek by his current custodians, that came to Torquay Museum with the coffin when in was donated in the 1950s.  ‘Psamtek’ is in fact nearly 1,000 years younger than the coffin itself.”

The secrets of the mummified boy were probed by Torbay Hospital’s state-of-the-art CT scanner in 2006 in an attempt to determine his age and cause of death.  It was discovered that he was three to four years old - around three years younger than previously thought - but there were no obvious signs of the cause of death.

Ever since he went on show as part of a major redevelopment at Torquay Museum in 2007, ‘Psamtek’, the only human mummy on public display in the county, has captured the imagination of thousands of curious visitors.

But now his own coffin has stolen the limelight, after it was discovered that it is nearly 1,000 years older than the body it contains.  Further investigation reveals the coffin may have been made for a junior member of royalty more than a century before the time of the famous boy king Tutankhamun.

Museum curator Barry Chandler said: “It's an extraordinary discovery and means that the coffin is now the most spectacular exhibit in our entire collection. It's extremely rare – even the British Museum doesn't have one quite like it."

Both the coffin and its contents were donated to the museum in 1956 by Lady Winnaretta Leeds, daughter of sewing machine heir Paris Singer.  Fascinated by Egyptology, Lady Leeds travelled to the Middle East many times.  It was during one of her visits in the 1920s that she is thought to have bought the coffin and mummy.

For years they were kept hidden away in storage until Torquay Museum carried out a £2 million refurbishment and decided to make the items the centrepiece of an Egyptian exhibition in their new Explorers' Gallery.

Mr Chandler said the museum always thought the coffin and its contents had not gone together and that the original occupant had been taken out so it could be reused.

“Not only has it gained an awful lot of age, but it has gone back to one of the most famous Egyptian dynasties of all.  No-one knows who exactly Devon's own ‘Psamtek’ was. It's possible that he perished during a turbulent period in Egypt's past when coffins were in short supply.”

The coffin is covered in linen impregnated with plaster.  Predominantly painted white, it has a red-painted face – indicating a male – and eyes that are made from volcanic glass and limestone mounted in bronze.  Further down, "perfectly modelled" knees are another of the features that indicate that the coffin must have originally contained someone important – either the child of a pharaoh or the offspring of a government minister.