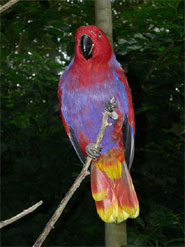 The gaudy plumage and acrobatic displays of birds of paradise are a striking example of sexual selection, Charles Darwin’s second great theory of evolution. But new research shows that this powerful process may collapse when mothers can decide whether to have a son or a daughter.

Choosing the sex of our offspring may seem totally beyond our control, but some animals have a remarkable capacity to manipulate this.  The female eclectus parrot, for example, has been known to produce 20 sons in a row before switching to producing only daughters.  Now, a team of evolutionary biologists has found that tight control over offspring sex ratios can have disastrous consequences for sexual selection.

Led by Dr Tim Fawcett, a research fellow at the University of Bristol, the team used mathematical models and computer simulations to investigate how sex-ratio control and sexual selection interact.  With sex ratios fixed at 50–50, the scientists found the classical pattern of sexual selection, with males evolving elaborate courtship displays to attract females.  But when they changed the models so that mothers could control the sex ratio of their offspring, they found a completely different pattern.

“The effect was dramatic,” said Dr Fawcett.  “When mothers choose the sex of their offspring, sexual selection collapses and male courtship displays disappear.  This is because females no longer find the displays attractive.”

The finding adds an unexpected twist to Darwin’s theory of sexual selection. “Previously, we thought that females needed to find a showy male to produce the best offspring. But when they can control the sex ratio, this no longer matters. Mothers with drab partners do just as well,” Dr Fawcett added.

The scientists now plan to put their theory to the test.  If they are right, this may help us to understand the great diversity in male courtship displays seen across the animal kingdom.

The research is published in Proceedings of the National Academy of Sciences USA.

The work was conducted while Dr Fawcett was based at the University of Groningen and was funded by the Netherlands Organisation for Scientific Research.