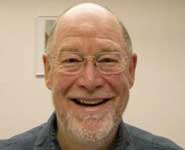 Paul Woods, a former Subject Librarian at the Arts and Social Sciences Library, passed away on 17 July. Jez Conolly pays tribute to a man of 'innate professionalism' and 'infectious joviality'.

Paul Woods, who passed away after a typically good-humoured, stoic yet reflective battle against pancreatic cancer, will be much missed by the many library and academic colleagues who came to know him during his long career at the University of Bristol.

Paul began work in the library at Bristol in 1971, initially as a cataloguer and shortly thereafter as one of the earliest appointments to the professional post of Subject Librarian. He quickly established himself as an enthusiastic, energetic member of staff, someone capable of enlivening all those around him and inspiring the library users with whom he came into contact. He was consistently prepared to employ innovative ways to engage and work with those seeking his help. His infectious joviality and peerless ability to win the race to the most appropriate wisecrack in any given situation perhaps belied his innate professionalism and acute attention to detail. Paul thrived particularly on the enquiry desk, guiding questioners to the answers they sought with equal measures of forensic thoroughness and playful wit. He embraced emerging technologies in their infancy and with consummate ease, mastering the art of bibliographic database usage and teaching, carving a niche for himself as a reliable point of contact in the use of library and information-related software, and championing new ways to help library users get to grips with the many information-seeking tools at their disposal.

Paul was always a joy to work alongside. Anyone who knew him could rely on him to help keep spirits high at the many moments of change that have affected the library throughout the years. Upon taking early retirement in 2009 he addressed the assembled throng at the leaving party at Royal Fort House somewhat in the manner of a town crier, signing off with a hearty ‘so long and thanks for all the fish!’ – a pointer for those in the know to his love of TV science fiction. He was never slow to introduce his many extracurricular interests to a work setting – for instance, the EndNote workbook that he developed drew heavily in its example exercises on his passion for bungee jumping! His love of music and long-time involvement in Morris dancing found expression in the many folk-tinged tunes that were never far from his lips.

It is truly saddening to reflect that a man so full of life has been so cruelly denied a long and happy retirement, but there is great solace in knowing that he has left behind a wealth of warm memories in the minds of so many people at the University. As the person who replaced him in his role as Social Sciences and Law Faculty Librarian I have to humbly concede that, in every way I can think of, Paul was actually irreplaceable.