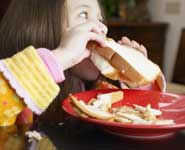 A diet, high in fats, sugars, and processed foods in early childhood may lower IQ, while a diet packed full of vitamins and nutrients may do the opposite, suggests research published by academics in the University of Bristol's School of Social and Community Medicine .

The study, published in the Journal of Epidemiology and Community Health, bases its findings on participants in the Avon Longitudinal Study of Parents and Children (ALSPAC), which tracks the long term health and well being of around 14,000 children born in 1991 and 1992.

Parents completed questionnaires, detailing the types and frequency of the foods and drinks their children consumed when they were three, four, seven and 8.5 years old.

This information was then quantified to produce a dietary pattern score for three different types of diet:  “processed” or high in fats and sugars; “traditional” high in meat and two veg; and “health conscious” high in salad, fruit and vegetables, rice and pasta.

IQ was measured using a validated test (the Wechsler Intelligence Scale for Children) when they were 8.5 years old. In all, complete data were available for just under 4,000 children.

On the other hand, a healthy diet was associated with a higher IQ at the age of 8.5, with every one-point increase in dietary pattern linked to a 1.2 increase in IQ.

Dietary patterns between the ages of four and seven had no impact on IQ.

The authors say that these findings, although modest, are in line with previous ALSPAC research showing an association between early childhood diet and later behaviour and school performance.

Dr Kate Northstone, Research Fellow in the School of Social and Community Medicine, said: "Our research suggests that any cognitive/behavioural effects relating to eating habits in early childhood may well persist into later childhood, despite any subsequent changes (including improvements) to dietary intake.”

The brain grows at its fastest rate during the first three years of life, say the authors, by way of a possible explanation for the findings, and pointing to other research indicating that head growth at this time is linked to intellectual ability.

Dr Pauline Emmett, Senior Research Fellow in the School of Social and Community Medicine, added: “It is possible that good nutrition during the first three years of life may encourage optimal brain growth, advocating further research to determine the extent of the effect early diet has on intelligence.”