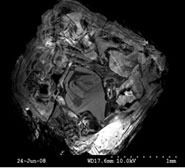 A study of Brazilian diamonds by Earth scientists from the University of Bristol has found that tiny inclusions in the diamonds contain traces of oceanic crust and sedimentary rocks, formed originally on the surface of the Earth then transported to depths of more than 300km.

The plate tectonic process of subduction transports materials from Earth’s outermost layers to the deep interior, hundreds of kilometres below our feet.  Traces of these deeply subducted materials can be imaged remotely by seismology or geochemistry.  However, sampling them directly is very difficult – the deepest hole ever drilled is a mere 12.2 km, and yet the centre of Earth is 6,400 km away.

As a result, our only direct insights into Earth materials below about 200 km depth come from diamonds.  Whilst most diamonds are valued for their clarity and purity, rarely they contain tiny inclusions of minerals, trapped when the diamond grew.

University of Bristol Earth scientists Galina Bulanova, Michael Walter, Chris Smith, Lora Armstrong, Simon Kohn, and Jon Blundy have been studying these tiny inclusions, less than a hair’s breadth across, from diamonds in the Juina region of central Brazil.

Remarkably they found traces of oceanic crust and sedimentary rocks formed originally on the Earth’s surface, prior to being transported to depths of some 300-700 km.  The diamonds and their inclusions were swept up in a plume of hot rock, responsible for magmatism across central Brazil almost 100 million years ago.

The results, published this week in the journal Contributions to Mineralogy and Petrology (vol. 160, p. 489), are the culmination of a truly interdisciplinary study using an array of spectroscopy, electron- and ion-microbeam techniques, stable isotope geochemistry and high pressure experimentation.

The published work is part of a larger enterprise involving inclusion-bearing diamonds from Juina, Dachine (French Guyana) and Murowa (Zimbabwe), and scientists from the University of Brasilia, the Smithsonian Institution, Carnegie Institution for Science and University College London.