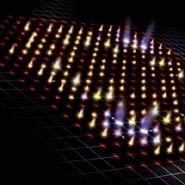 A graphic representation of the two-photon quantum walk. This unique behavior simulates the quantum walks in more complex spaces. The size, color and intensity of the points corresponds to the likelihood of the two photons appearing each location. The two areas of increased probability is a hallmark of quantum behavior. 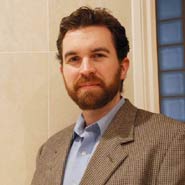 An international research group led by scientists from the University of Bristol has developed a new approach to quantum computing that could soon be used to perform complex calculations that cannot be done by today’s computers.

Scientists from Bristol’s Centre for Quantum Photonics have developed a silicon chip that could be used to perform complex calculations and simulations using quantum particles in the near future. The researchers believe that their device represents a new route to a quantum computer – a powerful type of computer that uses quantum bits (qubits) rather than the conventional bits used in today’s computers.

Unlike conventional bits or transistors, which can be in one of only two states at any one time (1 or 0), a qubit can be in several states at the same time and can therefore be used to hold and process a much larger amount of information at a greater rate.

“It is widely believed that a quantum computer will not become a reality for at least another 25 years,” says Professor Jeremy O’Brien, Director of the Centre for Quantum Photonics. “However, we believe, using our new technique, a quantum computer could, in less than ten years, be performing calculations that are outside the capabilities of conventional computers.”

The technique developed in Bristol uses two identical particles of light (photons) moving along a network of circuits in a silicon chip to perform an experiment known as a quantum walk. Quantum walk experiments using one photon have been done before and can even be modelled exactly by classical wave physics. However, this is the first time a quantum walk has been performed with two particles and the implications are far-reaching.

“Using a two-photon system, we can perform calculations that are exponentially more complex than before,” says Prof O’Brien. “This is very much the beginning of a new field in quantum information science and will pave the way to quantum computers that will help us understand the most complex scientific problems.”

In the short term, the team expect to apply their new results immediately for developing new simulation tools in their own lab. In the longer term, a quantum computer based on a multi-photon quantum walk could be used to simulate processes which themselves are governed by quantum mechanics, such as superconductivity and photosynthesis.

“Our technique could improve our understanding of such important processes and help, for example, in the development of more efficient solar cells,” adds Prof O’Brien. Other applications include the development of ultra-fast and efficient search engines, designing high-tech materials and new pharmaceuticals.

The leap from using one photon to two photons is not trivial because the two particles need to be identical in every way and because of the way these particles interfere, or interact, with each other. There is no direct analogue of this interaction outside of quantum physics.

“Now that we can directly realize and observe two-photon quantum walks, the move to a three-photon, or multi-photon, device is relatively straightforward, but the results will be just as exciting” says Prof O’Brien. “Each time we add a photon, the complexity of the problem we are able to solve increases exponentially, so if a one-photon quantum walk has 10 outcomes, a two-photon system can give 100 outcomes and a three-photon system 1000 solutions and so on.”

The group, which includes researchers from Tohoku University, Japan, the Weizmann Institute in Israel and the University of Twente in the Netherlands, now plans to use the chip to perform quantum mechanical simulations. The researchers are also planning to increase the complexity of their experiment not only by adding more photons but also by using larger circuits.

The research will be published in the next issue of Science, Friday 17 September.