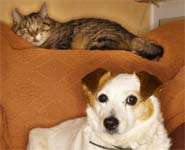 A new study by researchers at the University of Bristol has found that the UK domestic cat and dog population is larger than previously reported by industry figures.

Cats and dogs are popular pets in the UK but it has been over 20 years since domestic cat and dog population estimates in the UK have been published in scientific peer-reviewed journals.

The paper published in the Veterinary Record by Dr Jane Murray in the Department of Clinical Veterinary Science at Bristol University and colleagues, aimed to estimate the number of UK domestic cats and dogs and identify the characteristics of their owners.  The figures are also useful to the animal health and welfare professions, including rescue charities, which can use these and future estimates to assess population changes.

Female respondents and those aged less than 55 years were more likely to report dog ownership than other respondents. Dogs were less likely to be owned by households with one or more cats.

Dr Jane Murray, Cats Protection Lecturer in Feline Epidemiology, commenting on the research, said: “The study has shown many common factors relating to cat and dog ownership, such as a garden and rural location, but it has also identified some notable differences.

“In particular, the difference in the level of education achieved by a household owning cats and dogs.  The reason for this association is unclear.  It is unlikely to be related to household income as this variable was not shown to be significant but it could be related to household members with longer working hours having less time available to care for a dog.

The researchers recommend the study is repeated in 2011, (the year of the next scheduled UK census), as any increase or decrease in population numbers will enable pet ownership trends to be monitored.

Dr Jane Murray’s post is funded by the Cats Protection.

The Cats Protection is the UK’s leading cat welfare charity, rehoming and reuniting 55,500 cats and kittens every year.