The coloured circles represent the hologram, out of which the knotted light emerges. 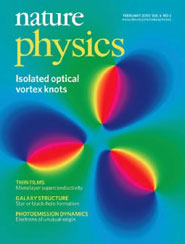 Understanding how to control light in this way has important implications for laser technology used in wide a range of industries.

Dr Mark Dennis from the University of Bristol and lead author on the paper, explained: “In a light beam, the flow of light through space is similar to water flowing in a river.  Although it often flows in a straight line – out of a torch, laser pointer, etc – light can also flow in whirls and eddies, forming lines in space called ‘optical vortices’.

“Along these lines, or optical vortices, the intensity of the light is zero (black). The light all around us is filled with these dark lines, even though we can’t see them”.

This new research demonstrates a physical application for a branch of mathematics previously considered completely abstract.

Professor Miles Padgett from Glasgow University, who led the experiments, said: “The sophisticated hologram design required for the experimental demonstration of the knotted light shows advanced optical control, which undoubtedly can be used in future laser devices”.

“The study of knotted vortices was initiated by Lord Kelvin back in 1867 in his quest for an explanation of atoms”, adds Dennis, who began to study knotted optical vortices with Professor Sir Michael Berry at Bristol University in 2000. “This work opens a new chapter in that history.”

This research was funded by the Leverhulme Trust and Mark Dennis is a Royal Society research fellow.