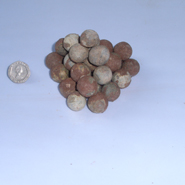 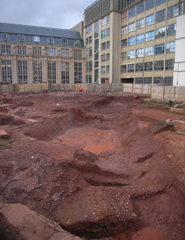 A view of the excavation site behind the University of Bristol’s H. H. Wills Physics Laboratory Bristol and Region Archaeological Services (BaRAS)

More secrets of Bristol’s Royal Fort, one of the most significant fortifications from the English Civil War, have been uncovered by archaeologists from Bristol and Region Archaeological Services working on the site behind the University of Bristol’s H. H. Wills Physics Laboratory.

Over a 10 week period, the team from Bristol Museum uncovered a substantial, heavily fortified building measuring in excess of 25 metres in length, displaying several window openings or embrasures – one of which contained a cache of 33 musket balls.  Other artefacts of note include a cannon ball, lead caps from gunpowder flasks and parts of two leather shoes from the ditch of the fort.

Perhaps the most unusual building discovered however, is a subterranean structure measuring over five metres square and several metres deep, possibly a magazine for storing munitions such as gunpowder.

Bruce Williams, Manager of Bristol and Region Archaeological Services (BaRAS) who directed the project said: “The excavations have helped to re-write our knowledge of the Royal Fort, in particular the scale of the fortified structures within its walls.”

Further information on the Spring 2009 dig.