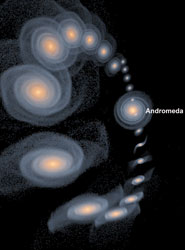 A simulation of Triangulum’s orbit around Andromeda. John Dubinski and Larry Widrow

Stars and giant structures around the Andromeda Galaxy – many seen for the first time – are probably the remnants of smaller galaxies that have been cannibalised by Andromeda, finds a new study published online today in Nature.

Stars and giant structures around the Andromeda Galaxy – many seen for the first time – are probably the remnants of smaller galaxies that have been cannibalised by Andromeda, finds a new study published online today in N ature.

The new images, captured by an international team of astronomers including the University of Bristol, are from the largest panoramic survey of Andromeda ever made. The survey covers a region nearly a million light years across.

It charted Andromeda’s unexplored outskirts for the first time and detected faint stars and giant structures that are almost certainly remnants of smaller galaxies, cannibalised by Andromeda as part of its ongoing expansion.

At 2.5 million light years from our own galaxy – the Milky Way Galaxy – the Andromeda Galaxy (M31) is our closest giant neighbour. It is so large it is visible to the naked eye from the Northern Hemisphere.

Another nearby galaxy, the Triangulum Galaxy (M33), was seen to be surrounded by a giant stellar ‘halo’ that the team believes provides persuasive evidence for its recent encounter with Andromeda. Stars are pulled from Triangulum as it orbits Andromeda due to the strong gravity of this massive galaxy. These stars are then consumed by Andromeda and contribute to its unstoppable expansion.

Dr Avon Huxor, from the University of Bristol’s Physics Department and an author on the paper, said: “Galaxies are large collections of stars and other matter that are held together by gravity. Theory holds that they evolve and grow by absorbing smaller galaxies over time. One way to test this idea is to find the left-overs from this process.

“But finding these faint structures is difficult, since it involves looking over an area hundreds of times larger than the main disk of the galaxy. The really exciting thing about this study is that we can see this merging of galaxies in real detail for the first time. Oddly enough, it is hard to do this with our own Galaxy, as we sit within it, which makes it difficult to disentangle what the data is telling us.”

Dr. Alan McConnachie, from the NRC Herzberg Institute of Astrophysics in Canada, who led the survey team, said: “That we are finding streams and structures over the entire survey area is a startling demonstration of the vast size of this ‘typical’ galaxy. Until a few years ago, no-one expected to find anything this far from the centre of a galaxy. But Andromeda is showing us that galaxies are much bigger than we originally thought.”

The results published today set the stage for a more detailed reconstruction of the formation of Andromeda, a process that appears to be continuing to this day.

The team includes astronomers from the National Research Council Canada (NRC) working alongside university-based researchers from across Canada, as well as colleagues in Australia, France, Germany, the UK and the USA.