The Moon in Bristol 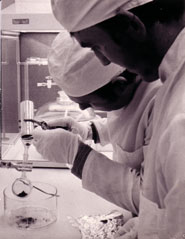 Colin Pillinger (R) and James Maxwell with a lunar sample, 1969 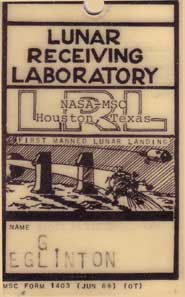 Samples of moon dust scooped up from the lunar surface by Neil Armstrong and Buzz Aldrin during the first landing of a man on the moon were analysed 40 years ago at the University of Bristol.

The sample consisted of 105 grams of lunar soil and was a small portion of the material placed by Armstrong and Aldrin in the first box to be filled on the moon – it was called the Bulk Box. Bristol was also assigned about 14 grams of lunar rock, a breccia No 10059. Later on they also received samples from the Apollo 12 mission.

The remit given by NASA to Professor Geoff Eglinton, who was responsible for the sample analysis, was to look for any signs of life – either past or present. But, as anticipated, once the samples had been analysed, Eglinton was able to confirm that he and his colleagues could find no signs of life.

The analyses were carried out by Eglinton and his assistants, Colin Pillinger and James Maxwell. Pillinger had been recruited specifically to work on the lunar samples. Eglinton remembered how “Colin and James arrived on about the same day to find that I was in Houston, so they had to get started on their own”.

In 1966, NASA had issued notification of an opportunity for scientists to study lunar samples, which they hoped that the Apollo missions would return to Earth before the end of the decade. Eglinton, then on the staff of Glasgow University, submitted an application and was subsequently appointed as a Principal Investigator.

In 1967, Eglinton’s Organic Geochemistry Unit moved from Glasgow to Bristol and preparations began for the receipt and analysis of samples, even though there was no guarantee at this stage that they would ever receive anything.

“It was during this time,” Eglinton said, “that I received a call from the States asking if I would join the Lunar Sample Analysis Planning Team. Of course I was delighted. This team was made up of about 10 people and I was the only non-American. I was invited because of my expertise in organic geochemistry, which was a very new field at the time.”

Eglinton attended the launch of the Apollo 11 mission. “But more than seeing it, is experiencing it,” said Eglinton, “because of the tremendous vibrations as it takes off.” Afterwards he went back to Houston to watch the landing from the NASA viewing room.

Because the samples coming to Bristol were to be used to look for organic material, they required special handling in the Lunar Receiving Laboratory at Houston so that they would not become contaminated with organic compounds from Earth, such as dandruff, finger prints and any other organic material.

As soon as the samples arrived in Bristol in October 1969, the team put them on show to the general public. Queues formed for hundreds of yards outside the University and much of the way down Park Street.

The work of the group in Bristol demonstrated the presence of methane on the moon, produced by chemical reactions driven by the solar wind. For this study, which involved developing ingenious analytical techniques, Eglinton was awarded the NASA Gold Medal for Exceptional Scientific Achievement.

In 2008, Professor Eglinton was awarded the Dan David prize for his pioneering work in organic geochemistry. Other recipients of the million-dollar prize have been Al Gore for his campaign on global warming and Tom Stoppard for his literary work.