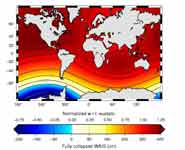 The potential contribution to sea level rise from a collapse of the West Antarctic Ice Sheet (WAIS) have been greatly overestimated, according to a new study published in the journal Science.

The potential contribution to sea level rise from a collapse of the West Antarctic Ice Sheet (WAIS) have been greatly overestimated, according to a new study published in the journal Science.  Scientists estimate global sea level would rise 3.3 metres, not five or six, as previously thought.  The Atlantic and Pacific seaboards of the US, even in the case of a partial collapse, would experience the largest increases, threatening cities such as New York, Washington DC and San Francisco.

Long thought of as the sleeping giant with respect to sea level rise, Antarctica holds about nine times the volume of ice of Greenland. Its western ice sheet is of particular interest to scientists due to its unusual below-sea level topography, which is believed to make it inherently unstable. But the area’s potential contribution to sea level has been greatly overestimated, according to new calculations.

Professor Jonathan Bamber at Bristol University, lead author of the study, said: “There’s a vast body of research that’s looked at the likelihood of a WAIS collapse and what implications such a catastrophic event would have for the globe. Yet all of these studies have assumed a five- to-six-metre contribution to sea level rise. Our calculation shows those estimates are much too large, even on a thousand year timescale.”

Jonathan Bamber, Professor in Physical Geography, at the University’s School of Geographical Sciences is currently a Visiting Fellow at the University of Colorado at Boulder’s Cooperative Institute for Research in Environmental Sciences, or CIRES.

Instead of assuming a complete disintegration of the whole WAIS, Bamber and colleagues used models, based on glaciological theory, to simulate how the massive ice sheet would respond if the floating ice shelves fringing the continent broke free. Vast ice shelves currently block the WAIS from spilling into the Weddell and Ross Seas, limiting total ice loss to the ocean.

The most unstable areas of the WAIS are those grounded below sea level on bedrock with negative bedslope, where the bedrock slopes downwards inland. Once undammed, these areas would quickly become buoyant, forming new floating ice shelves further inland and, in time, precipitating further break up and collapse.

For their calculations, the researchers assumed that only these areas would collapse and contribute to sea level rise. In contrast, they assumed areas grounded above sea level, or on bedrock that slopes upwards inland, would likely retain substantial ice masses.

Professor Bamber said: “Unlike the world’s other major ice sheets – the East Antarctic Ice Sheet and Greenland – WAIS is the only one with such an unstable configuration.”

Just how “rapid” a collapse of the WAIS would be is largely unknown. Though if such a large mass of ice steadily melted over 500 years, as suggested in an early study, it would add about 6.5 millimetres per year to sea level rise: twice the current rate due to all sources.

Professor Bamber added: “Interestingly, the pattern of sea level rise is independent of how fast or how much of the WAIS collapses. Even if the WAIS contributed only a metre of sea level rise over many years, sea levels along North America’s shorelines would still increase 25 per cent more than the global average.”

Regional variations in sea level would be largely driven by the redistribution of ice mass from the Antarctic continent to the oceans, according to the study. With less mass at the South Pole, Earth’s gravity field would weaken in the Southern Hemisphere and strengthen in the North, causing water to pile up in the northern oceans.

This redistribution of mass would also affect Earth’s rotation, which in turn would cause water to build up along the North American continent and in the Indian Ocean.

The study was conducted with support from the National Environmental Research Council (NERC) and in collaboration with Delft University of Technology in the Netherlands and the University of Durham.