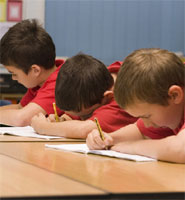 Children born into low-income families in UK and the US in the early years of the twenty-first century are at a disadvantage when they start school, according to new research by Elizabeth Washbrook and Jane Waldfogel from the University’s Centre for Market and Public Organisation.

Children born into low-income families in UK and the US in the early years of the twenty-first century are at a disadvantage when they start school, according to new research by Elizabeth Washbrook and Jane Waldfogel from the University’s Centre for Market and Public Organisation.

According to the study, children from low-income backgrounds are raised in environments that fail to promote their cognitive, social and health development adequately and, as a result, they are more likely to begin school with deficits in their learning ability and social behaviour.

The key findings of the research are that:

The study analyses data on around 19,000 children born in the UK in 2000 (the Millennium Cohort Study) and parallel data on around 10,000 children born in the United States in 2001 (the Early Childhood Longitudinal Study Birth Cohort). The children in both studies were followed from the age of nine months onwards, and completed tests in language, literacy and mathematics skills at ages three, four or five.

The research reveals that there are sizeable gaps in children’s cognitive ‘school readiness’, and that the gaps are of comparable magnitude in the UK and the US. The poorest fifth of children in both countries score on average in the 32nd to 35th percentile across the tests but there are differences between the two countries in the relationship between income and cognitive outcomes among better-off families. The gap between the bottom fifth and the middle fifth is smaller in the United States, while the difference between the middle and the richest fifth is much larger.

So, although the UK appears to be relatively successful in promoting equality among children in families with incomes above a moderate level, the poorest 20 per cent are equally as disadvantaged, in relative terms, as the equivalent American children.

Further analysis of the American children suggests that differences in the parenting of low and higher-income children are key to understanding the income-related gaps in children’s cognitive test scores.

The research also shows that higher-income mothers interact more positively with their children when they are as young as nine months old, show greater sensitivity to their needs, are less intrusive and provide more cognitive stimulation. These types of behaviours are then strongly related to children’s performance at the time of entry to school, and in particular to language development.

The study also finds evidence that participation in Head Start (an education programme targeted at low-income children) boosts the performance of the most disadvantaged children, and so reduces the gaps to some extent.