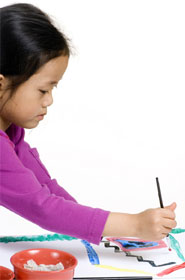 Left-handed children do less well in national tests than their right-handed peers – and the gap does not diminish as they get older.

Left-handed children do less well in national tests than their right-handed peers – and the gap does not diminish as they get older.

These are the findings of new ESRC (Economic and Social Research Council) funded research, by Professors Paul Gregg, Carol Propper and Katharina Janke from the CMPO (Centre for Market and Public Organisation) at the University of Bristol.

The study set out to investigate whether left-handedness for contemporary children – for whom handedness is no longer a source of stigma – is associated with differential cognitive development.

The research, which looked at over 10,000 children from the Children of the 90s study, uses clinical measures of handedness. These are matched to data on each child’s performance at school on national tests – the key stage 1, 2 and 3 tests, taken at the ages of seven, 11 and 14 respectively, and an IQ test.

The analysis shows that:

· Left-handed children perform slightly less well in terms of the IQ test and the key stage 2 and key stage 3 tests.

· In addition, there is no evidence that the gap in cognitive tests diminishes as children get older.

· But the size of the effect is modest. A typical left-handed child has test scores one per cent below those of their right-handed contemporary.

· While there is some penalty to being left-handed, particularly for girls, the main penalty is to children who do not have a dominant hand early in life.

· Children with ‘mixed-handedness’ have lower development, which first appears in the early years but remains present at age 14, particularly for girls.

“Our results suggest that schools could use mixed-handedness as a marker for children who are likely to need greater intervention.

“As tests for mixed-handedness are simple to administer, they would be a cheap way of identifying children who otherwise might slip behind their peers.”

The detail of the Children of the 90s data means that the researchers can rule out other factors that might have caused a gap in cognitive development between left- and right-handed children – for example, being from a poorer home background, family size, parents’ handedness and child’s birth weight.

The University’s Centre for Market and Public Organisation is a leading research centre, combining expertise in economics, geography and law. The Centre’s objective is to study the intersection between the public and private sectors of the economy, and in particular to understand the right way to organise and deliver public services. The Centre aims to develop research, contribute to the public debate and inform policy-making.

The Economic and Social Research Council (ESRC) funds research and training in social and economic issues. They are an independent organisation, established by Royal Charter, but receive most of their funding through the Department for Innovation, Universities and Skills. Their budget of £181 million (2007/2008) funds over 2,500 researchers in academic institutions and policy research institutes throughout the UK. They also support more than 2,000 postgraduate students.
Please contact Alison Taylor for further information.