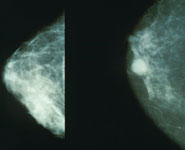 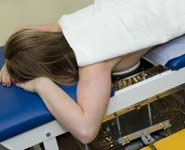 A demonstration of the radar breast imaging system 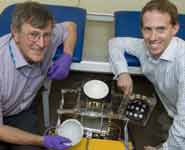 Professor Alan Preece and Dr Ian Craddock from the University of Bristol have been working for a number of years to develop a breast-imaging device which uses radio waves and therefore has no radiation risk unlike conventional mammograms.

The team began developing and researching a prototype around five years ago and have received funding from organisations including the Engineering and Physical Sciences Research Council (EPSRC), the trustees of the United Bristol Hospitals and the University of Bristol spin-out company, Micrima Ltd.

Dr Ian Craddock from the University's Department of Electrical and Electronic Engineering, said: "This new imaging technique works by transmitting radio waves of a very low energy and detecting reflected signals, it then uses these signals to make a 3D image of the breast.  This is basically the same as any radar system, such as the radars used for air traffic control at our airports."

Mike Shere, Associate Specialist Breast Clinician at NBT, added: "Currently women are diagnosed in three ways: firstly by a clinician then by using imaging such as mammography and ultrasound and lastly by a needle biopsy.

"The radar breast imaging system came to Frenchay in September this year and so far around 60 women have been examined using it.

"It takes less time to operate than a mammogram approximately six minutes for both breasts compared with 30-45 minutes for an MRI, and like an MRI it provides a very detailed 3D digital image.

"Women love it as they compare it to a mammogram and find the whole experience much more comfortable."

The radar breast imaging system is built using transmitters and receivers arranged around a ceramic cup, which the breast sits in. These transmitters view the breast from several different angles.

In the initial stages of the study the team used mammogram images to compare similar abnormalities in the new 3D image produced from the radio breast imaging system.

Professor Preece from the University's Medical Physics, said: "I started off looking at breast tumour imaging in 1990 using a hand held scanner similar to ultrasound however it did not have enough sensitivity and that's when I got to know some people in engineering and together we approached the EPSRC to help.

"Using this engineering knowledge we built the machine using ground penetrating radar, a similar technique to land mine detection to take four hundred quarter of a second pictures of the breast to form a 3D image.

"Women do not feel any sensation and it equates to the same type of radiation exposure as speaking into a mobile phone at arms length which makes it much safer.

"We are extremely grateful for North Bristol NHS Trust help in getting the project underway with so much enthusiasm.

"We are constantly learning and adapting and it has been particularly easy to work with NBT, we have seen some very promising results so far."

In the coming months the team plan on "testing blind", this means looking at images taken by both machines and examining each independently to check whether the radio breast imaging system's 3D image picks up the same abnormalities as a mammogram would and if anything else is identified in the new image.

They hope that if the results continue, further trials will be scheduled for the next 12 months. These trials will focus specifically on young women as these can prove the most challenging. They also hope that two new prototypes will be made for further trials in other hospitals around the country.

"This technology will ultimately only benefit the patient if it can be successfully commercialised", said Roy Johnson, CEO of Micrima Ltd, "this new invention could provide a safe, more comfortable experience for women as well as giving clinicians a better image of the breast allowing them to pick up abnormalities at an earlier stage.  We particularly hope that it may work well in younger women who can pose a problem to conventional mammography."

In this stage of the process the system provides an additional picture of the breast to complement the other imaging devices available, and also has the potential to be made cheaply en-mass.

The project is founded on Professor Ralph Benjamin’s pioneering work on microwave focusing. He was brought to Bristol by Professor Joe McGeehan, Director of the University’s Centre for Communications Research (CCR) in the Department of Electrical and Electronic Engineering.

The research is also covered in the EPSRC's quarterley magazine, Pioneer. The CCR is a world-leading centre for research into Communications and was established in 1987 by Professor McGeehan. The CCR provides an environment in which research of the highest calibre can be undertaken.

The Centre’s contributions range from fundamental research through to commercial exploitation, including several successful spin-out companies. Its military-funded research into plastic land-mine detection has led, through collaboration with Medicine and Medical Physics, to the establishment of the spin-out company, Micrima and the development of the radar breast imaging system.

Micrima is commercialising the work of academics associated with the Department of Electrical and Electronic Engineering at the University of Bristol. Micrima is delivering radio wave radar technology for detecting breast cancer. The technology is non-invasive, non-ionising and inexpensive. Early stage seed funding was provided by the University of Bristol’s Enterprise Development Fund, NESTA and others.