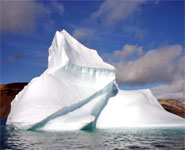 Increasing amounts of ice mass have been lost from West Antarctica and the Antarctic peninsula over the past ten years, according to research published online this week in Nature Geoscience.

Increasing amounts of ice mass have been lost from West Antarctica and the Antarctic peninsula over the past ten years, according to research from the University of Bristol and published online this week in Nature Geoscience.

Meanwhile the ice mass in East Antarctica has been roughly stable, with neither loss nor accumulation over the past decade.

Professor Jonathan Bamber at the University of Bristol and colleagues estimated the flux of ice from the ice sheet into the ocean from satellite data that cover 85% of Antarctica's coastline, which they compared with simulations of snow accumulation over the same period, obtained using a regional climate model.

Professor Bamber said: “To put these figures into perspective, four billion tons of ice is enough to provide drinking water for the whole of the UK population for one year."

The authors conclude that the Antarctic ice sheet mass budget is more complex than indicated by the evolution of its surface mass balance or climate-driven predictions. Changes in glacier dynamics are significant and may in fact dominate the ice sheet mass budget. This conclusion is contrary to model simulations of the response of the ice sheet to future climate change, which conclude that it will grow due to increased snowfall.

The ice loss is concentrated at narrow glacier outlets with accelerating ice flow, which suggests that glacier flow has altered the mass balance of the entire ice sheet.

Over the 10 year time period of the survey, the ice sheet as a whole was certainly losing mass, and the mass loss increased by 75% during this time. Most of the mass loss is from the Amundsen Sea sector of West Antarctica and the northern tip of the Peninsula where it is driven by ongoing, pronounced glacier acceleration. In East Antarctica, the mass balance is near zero, but the thinning of its potentially vulnerable marine sectors suggests this may change in the near future.