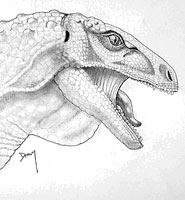 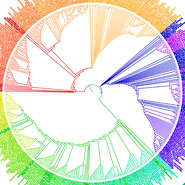 Part of the supertree

An international study, led by the University of Bristol, shows that during their last 50 million years of existence, dinosaurs were not expanding as actively as had been previously thought and that the apparent explosion of dinosaur diversity may be largely explained by sampling bias.

It has long been debated whether dinosaurs were part of the ‘Terrestrial Revolution’ that occurred some 100 million years ago during the Cretaceous when birds, mammals, flowering plants, insects and reptiles all underwent a rapid expansion.

An international study, led by the University of Bristol, shows that during their last 50 million years of existence, dinosaurs were not expanding as actively as had been previously thought and that the apparent explosion of dinosaur diversity may be largely explained by sampling bias.

The team produced a ‘supertree’ of dinosaurs, showing the most likely pattern of evolution for 440 of the 600 known species of dinosaur. "Supertrees are very large family trees made using sophisticated computer techniques that carefully stitch together several smaller trees which were previously produced by experts on the various subgroups”, explained lead author Graeme Lloyd.

“Our supertree summarises the efforts of two decades of research by hundreds of dinosaur workers from across the globe and allows to look for unusual patterns across the whole of dinosaurs for the first time." It is the most comprehensive picture ever produced of how dinosaurs evolved. The results are published today (23 July) in the Proceedings of the Royal Society B.

Professor Mike Benton from Bristol University said: "It's not complete, but it's the most detailed and comprehensive single evolutionary tree produced for dinosaurs, and indeed for almost any other group.

"Up until now, most studies of the evolution of dinosaurs were not tested numerically against an accurate and comprehensive database. We hope our study will mark the first of a new wave of such thorough, quantitative studies in palaeontology."

The new study uses statistical techniques to distinguish unusually high rates of diversification from normal rates. The results show that all the bursts of diversification happened in the first fifty million years of the evolution of dinosaurs. Later expansions were not distinguishable from normal rates. This suggests dinosaurs did not take advantage of the new food supplies available during the Cretaceous Terrestrial Revolution – such as flowering plants, lizards, snakes, birds and mammals.

The work was done using the High Performance Computing facilities of the National University of Ireland, Maynooth. It was based on a combination of 155 published dinosaur ‘trees’ and took approximately 5,000 hours of calculation time.

The key focus was to see whether dinosaurs had been part of a major phase of evolution on land – the Cretaceous Terrestrial Revolution (between 125–80 million years ago) – when many new groups of plants and animals expanded rapidly. During this time, the flowering plants and social insects arose and became more and more common. Many backboned animals also expanded to take advantage of the new sources of food.