New Fellow of the Royal Society 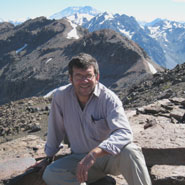 Jon Blundy, Professor of Petrology at the University of Bristol, has achieved the rare distinction of being elected a Fellow of the Royal Society for his scientific excellence in the field of Earth Sciences.

Jon Blundy, Professor of Petrology at the University of Bristol, has achieved the rare distinction of being elected a Fellow of the Royal Society for his scientific excellence in the field of Earth Sciences.

The Fellowship of the Royal Society is composed of 1,300 Fellows and 130 Foreign Members. They are highly distinguished scientists from the United Kingdom, other Commonwealth countries and the Republic of Ireland.

Professor Blundy, from the University’s Department of Earth Sciences, has made fundamental contributions to understanding the generation and movement of magma within the earth. His latest research has combined a wide range of field, analytical and laboratory skills in quantifying the pressure-temperature paths followed by magmas as they ascend beneath volcanoes, and has cast important new light on the evolution of magmas immediately before major eruptions.

This latest award brings to 32 the number of academics currently at Bristol University whose work in the fields of science, engineering, technology and medicine has been honoured in this way.

The University’s Vice Chancellor, Professor Eric Thomas, said: “As well as being a great personal distinction for Professor Blundy, this is a further reflection of the University’s excellence in research and continues the outstanding success the University has had in recent years.”

The Royal Society is the world’s oldest scientific academy and has been at the forefront of enquiry and discovery since its foundation in 1660.  Past and present members include Charles Darwin, Albert Einstein, Dorothy Hodgkin, Isaac Newton, Christopher Wren and Stephen Hawking.

Fellows of the Royal Society are elected for life and designate themselves through the use of the letters FRS after their names. Only 44 new members are elected each year.