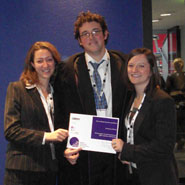 (from left to right) Claire Rosling, Joe Beames, Natalie Stear after receiving their award at the HEVA ceremony 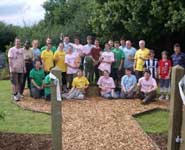 An image of the Stockwood Community Centre challenge volunteers

Five PhD students in the University of Bristol’s School of Chemistry have won a national volunteering award. The group, who are members of the Graduate Chemistry Association (GCA), won a Higher Education Student Volunteering Award for their outstanding commitment towards volunteering activities.

Five PhD students in the University of Bristol’s School of Chemistry have won a national volunteering award. The group, who are members of the Graduate Chemistry Association (GCA), won a Higher Education Student Volunteering Award for their outstanding commitment towards volunteering activities.

The Higher Education Academy’s Volunteering Awards reward and give national recognition to exemplary volunteering projects led by student and staff volunteers who have shown significant commitment to, or exceptional execution of, volunteering activities.

The group won the award for carrying out two large community challenges, which took six months each to arrange, over the past two summers. In July 2006, 32 volunteers from the School of Chemistry decorated the interior of Weston Park Primary School, for the school’s 259 pupils. In July 2007, a group of 27 volunteers transformed a patch of wasteland by creating a landscaped garden complete with nature area, bark paths, benches, a lawn and raised flower beds at Stockwood Community Centre.

In addition to co-ordinating the two volunteering projects the group also arranged a number of charity fundraising events. In the months between the projects, the group raised over £700 from cake sales to raise money for Cancer Research UK and Comic Relief.

Natalie.Stear said: “We are delighted to have won such a prestigious award and hope that it will inspire others to take up volunteering as well as help generate similar opportunities in the future. We found the challenges extremely rewarding to do and glad they have helped make a difference to the community and environment in which we live in.”

Professor Tim Gallagher, Head of the School of Chemistry, said: “I congratulate the team for their outstanding achievement, which recognises the immense efforts of the GCA in community-based activities, and the pride that they take in delivering successful projects.

“I would also like to pay tribute to Dr Nick Walker who, as a member of academic staff, has played a key role as a mentor to the GCA over the past two years.”

The Graduate Chemistry Association promotes integration within the School of Chemistry by organising social, volunteering and professional development events.