Morphine: comfort for the dying or control for the living? 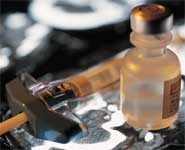 Cancer patients are suffering unnecessarily because they wrongly believe that morphine and other opioids are only used as “comfort for the dying” and as a “last resort” rather than seeing them as legitimate pain killers that can improve their quality of life.

Cancer patients are suffering unnecessarily because they wrongly believe that morphine and other opioids are only used as “comfort for the dying” and as a “last resort” rather than seeing them as legitimate pain killers that can improve their quality of life.

In a study published online today (Tuesday 11 December) in the cancer journal, Annals of Oncology, experts in palliative care at Bristol University also say “the belief that opioids hasten death is widely held” amongst patients and this “has a significant impact on pain management, as patients felt that an offer of opioids signified imminent death”. Previous studies have estimated that between 40-70 per cent of cancer patients may not have their pain properly controlled with the right medication for a variety of reasons.

Dr Colette Reid, the lead author of the study, said: “If we are to employ the range of available opioids in order to successfully manage pain caused by cancer, we must ensure that morphine does not remain inextricably linked with death. If this connection stays in place then morphine will continue to be viewed as a comfort measure for the dying rather than a means of pain control for the living.”

Dr Reid, Senior Lecturer at Bristol University and a Consultant in Palliative Medicine at the Gloucester Royal Hospital, conducted in-depth interviews with 18 patients with metastatic cancer, aged between 55 and 82, who were asked to take part in a cancer pain management trial. She wanted to examine how patients reacted when first offered an opioid drug described as similar to morphine. Dr Reid also wanted to understand the factors that influenced patients’ decisions whether to accept or to reject morphine. The interviews were analysed along with an experienced social scientist Dr Rachael Gooberman-Hill, and Geoffrey Hanks, Professor of Palliative Medicine, both from the University of Bristol.

The patients interviewed were all white and half of them were women. Their views and experiences about morphine fell into four distinct but inter-related categories: anticipation of death, morphine as a last resort, the role of the professional, and no choice but to commence.

Morphine as a “last resort” was the central theme to emerge from the interviews. The authors write: “We found that patients with cancer who were offered morphine for pain relief interpreted this as a signal that their health professional thought they were dying, because opioids were interventions used only as a ‘last resort’. Because participants themselves were not ready to die, they rejected morphine and other opioids as analgesics, despite the pain experienced as a consequence. Participants’ descriptions of the role of professionals indicated that patients value professionals’ confidence in opioids. Some patients may therefore become more frightened when offered a choice, since this indicates a lack of confidence in the opioid as an analgesic.”

It could be argued that the patients’ belief that the use of morphine represented a ramping up of treatment in the face of approaching death and the associated pain is a reasonably held view, especially as most of the patients interviewed for the study have subsequently died.

However, Dr Reid said: “The World Health Organization guidelines for the management of cancer pain state that analgesic treatment choices should be based on the severity of the pain, not on prognosis. So patients at all stages of cancer could have morphine if their pain is sufficient. In reality, the patients most likely to experience pain, and likely also to have the most severe pain, are those with metastatic disease, i.e. their cancer cannot be cured. These patients may yet have many months to live, but their quality of life is adversely affected by pain, since unrelieved pain leads to social isolation, loss of role and depressed mood. This was the group of patients that we interviewed – patients with metastatic disease and life expectancy measured in months.

“The fear of these patients was that morphine suggested imminent death (and also possibly hastened death) and that once commenced would mean that they would not be able to function normally. However, morphine if used properly, can actually promote quality of life by allowing patients with pain to function better.”

Dr Reid and her colleagues say that the role of the medical professional is crucial in helping to change patients’ beliefs and attitudes towards morphine. They write that the study’s findings “highlight the importance of the professional in cancer pain management, but also how beliefs about opioids that are communicated to the relatives of the dying may have implications for the pain relief of others in the future”.

Dr Reid said: “During the interviews, patients told us that that when a professional had been confident about opioids, then this had made them feel more able to accept the possibility of taking opioid medication. However, the main source of their fears was either personal experience or stories told by others. If more patients had good experiences with morphine (and other opioids) then the stories will be more reassuring.”

She continued: “Our interviews suggested to us that the patients detected professional ambivalence towards morphine and so this heightened their fears. They also told us that professionals had worried, incorrectly, about hastening death by using morphine and had communicated this fear to relatives. We are getting better at educating medical students about opioids and pain management, but another study we are involved in at the moment suggests that there are definitely educational needs for professionals. I think the role of palliative care teams is crucial here, since we can educate both professionals and patients.”

In an accompanying editorial, Dr Marco Maltoni, Head of the Palliative Care Unit, Forlì Local Health Authority and Istituto Scientifico Romagnolo per lo Studio e la Cura dei Tumori, Meldola, Italy, agrees. He writes: “Professional competence, correct communication, and a relationship based on trust are the three principle factors taken into consideration by patients when deciding whether or not to start opioid treatment.”

He concludes that the study “which originates from the birthplace of palliative care, is somewhat disturbing in the messages it conveys – extreme fear of opioids and high barriers to palliative care strategies. It suggests that a great many years of health education have not produced the results that might have been hoped for. The problem remains that a number of oncologists today still tend to reserve the use of opioids for the final stages of the disease. A vision of pain management and palliative care that is not solely linked to the end-of-life but rather seen as a positive option, in the less advanced stage of disease as well, needs to be promoted.”

Opioid analgesics for cancer pain: symptom control for the living or comfort for the dying? A qualitative study to investigate the factors influencing the decision to accept morphine for pain caused by cancer. Annals of Oncology. doi:10.1093/annonc/mdm462.

Annals of Oncology is the monthly journal of the European Society for Medical Oncology.