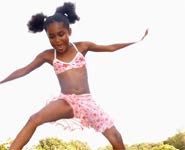 New research from the Children of the 90s study shows that children who are more active have lower blood pressure.

New research from the Children of the 90s study shows that children who are more active have lower blood pressure. And they don’t need to work up a sweat - it is the amount of activity that matters, rather than the intensity.

Raised blood pressure is strongly associated with cardiovascular disease. It can start in childhood and tends to track into adulthood. So controlling blood pressure in the early years could have long-term health benefits.

The ALSPAC study (also known as Children of the 90s) has been following the health and development of 14,000 children since before birth. At age 11, over 5,000 had their blood pressure checked and wore activity monitors which recorded every move they made for up to seven days.

Children whose overall activity levels were around 17 per cent above the average had blood pressure (BP) readings of at least 1 per cent below the average. It was the total amount of time spent moving around that seemed to have the greatest effect on BP, rather than bursts of vigorous activity.

“A 1 per cent difference in BP doesn’t sound much, but it could be clinically significant over the long term,” said lead researcher Dr Sam Leary.

“What’s more, this improvement can be achieved with a very small increase in exercise. 17 per cent above the norm only represents a little extra activity, because average levels are so low. The monitors worn by the 11-year-olds showed that less than 3 per cent of them did the 60 minutes a day of moderate to vigorous activity that the Government recommends. So there’s plenty of scope for improvement.

“Any activity other than lying or sitting contributes to the total volume of activity. So just walking to school instead of going by car is beneficial. Even hiding the TV remote could help!”

The relationship between physical activity and blood pressure is well-established in adults. But in children the picture has been less clear, because most research has been based on questionnaires, which can be unreliable. The current study, which uses accelerometers, is likely to be more accurate. It is also (as far as Dr Leary is aware) the first study to compare the volume of activity with the intensity.

“Our findings suggest that encouraging children to be more active may help to reduce their current blood pressure, which is likely to track into adulthood and reduce their risk of heart disease,” said Dr Leary.