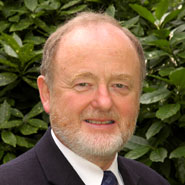 Professor Clarke will be responsible for running the academic side of the University and will stand in for the Vice-Chancellor, Professor Eric Thomas, on all matters when the latter is away from Bristol. He will take up the appointment in September 2008.

“I’m genuinely delighted and honoured to be asked to serve the University in this new capacity,” said Professor Clarke. “I look forward very much to working with the pro vice-chancellors, the deans and other colleagues to realise our academic aspirations.”

The creation of the deputy post will enable the Vice-Chancellor himself to devote sufficient time to the national and international duties expected of the leader of one of the UK’s top universities.

Professor Thomas said: “David won through from a highly competitive field of candidates to secure this role. I have every confidence that his appointment will bring major benefits to our University.”

David Clarke studied law at Queens' College Cambridge and was a solicitor until his appointment as a lecturer in law at Bristol in 1977. He became a professor in 1995 and served as head of department and then dean before becoming one of the four pro vice-chancellors in 2005.