What happens when dad looks after the kids? 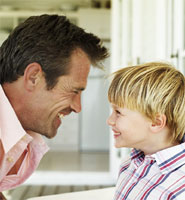 According to new research from the University of Bristol, some fathers do not provide their young sons with the same quality of intellectual stimulation as mothers do. Boys who spend at least 15 hours a week in their father’s care as toddlers perform worse in academic assessments when they start school.

According to new research from the University of Bristol, some fathers do not provide their young sons with the same quality of intellectual stimulation as mothers do. Boys who spend at least 15 hours a week in their father’s care as toddlers perform worse in academic assessments when they start school.

This is one of the key findings of new research by Elizabeth Washbrook published in the autumn 2007 issue of Research in Public Policy from the Centre for Market and Public Organisation.

More children than ever before are spending significant amounts of time in their early years in the sole care of their fathers and the study explores the potential consequences of this on children’s cognitive and social development. It looks at the early childcare experiences of over 6,000 children, born in and around Bristol in the early 1990s, who lived at least their early lives in a household with both parents. It examines whether children who spent a lot of time in the care of their fathers differed from other children in terms of their academic and behavioural readiness for school at age four.

The data show that fathers were more widely used as a source of primary childcare in the first three years than relatives, childminders or nurseries. Around a third of children were regularly cared for by their fathers (without their mothers present) for at least five hours a week in the first year of life (infants). This figure rose to two-thirds for children aged one and two (toddlers). 13 per cent of infants and 20 per cent of toddlers were regularly left alone with their fathers for more than 15 hours a week.

The central findings of the research are that the effects of time alone with the father depend crucially on the gender of the child, the age at which the care took place and the number of hours per week of care provided.

There is evidence that boys – but not girls – who spent at least 15 hours a week in paternal care when they were toddlers performed worse on academic assessments when they started school. This cannot be explained by parents’ economic or psychological characteristics, nor by the characteristics of the child.

This raises concerns that, on average, fathers do not provide the same degree of mental stimulation to sons as mothers do. When in charge, fathers may be more inclined to see their role as monitoring the child and seeing to its physical needs and less inclined to devise creative activities that develop a child’s intellectual skills.

There are two potential explanations for why girls seem immune: fathers may interact differently with sons and daughters or daughters may be less sensitive to the degree of mental stimulation in the home environment.

On the other hand, moderate amounts of paternal care of toddlers are associated with better behavioural outcomes at the start of school, and this is the case for both boys and girls. Psychologists have argued that because mothers and fathers interact with children in different ways, children have different expectations of their parents. This could in turn increase their awareness of different social styles and perhaps contribute to the development of social competence. These results support this view.

However, the beneficial effects of paternal care only take effect when that care begins after the first year of life. Childcare by fathers over the first 3 years or in excess of 15 hours a week has no effect compared to childcare by mothers. Moderate hours of care by fathers that are not maintained after the first year are associated with greater behavioural problems, but this type of arrangement is rare and accounts for only 4 per cent of all households.

With the exception of this small and unrepresentative group, there are no significant effects on children of paternal involvement in childcare in the first year of life. This is perhaps surprising, given that breastfeeding and bonding between mother and child are expected to be of key importance in this very early period. Rather, it is when children pass their first birthdays – and presumably become more sensitive to the nature of their environments – that parenting differences between mothers and fathers start to matter.

A corollary of this is that if paternity leave encourages fathers to undertake moderate childcare responsibilities when their children are toddlers, this may have beneficial effects on a child’s social development.