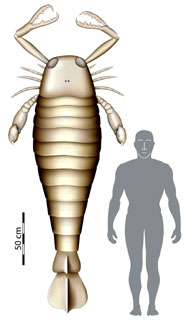 The discovery of a giant fossilised claw from an ancient sea scorpion indicates that when alive it would have been about two and a half meters long, much taller than the average man.

The discovery of a giant fossilised claw from an ancient sea scorpion indicates that when alive it would have been about two-and-a-half meters long, much taller than the average man.

This find, from rocks 390 million years old, suggests that spiders, insects, crabs and similar creatures were much larger in the past than previously thought.

Dr Simon Braddy from the Department of Earth Sciences at the University of Bristol, co-author of an article about the find, said, ‘This is an amazing discovery. We have known for some time that the fossil record yields monster millipedes, super-sized scorpions, colossal cockroaches, and jumbo dragonflies, but we never realised, until now, just how big some of these ancient creepy-crawlies were.’

The research is published online today in the Royal Society’s journal Biology Letters. The claw was discovered by one of Dr Braddy’s co-authors, Markus Poschmann, in a quarry near Prüm in Germany.

Poschmann described finding the fossil: " I was loosening pieces of rock with a hammer and chisel when I suddenly realised there was a dark patch of organic matter on a freshly removed slab. After some cleaning I could identify this as a small part of a large claw. Although I did not know if it was more complete or not, I decided to try and get it out. The pieces had to be cleaned separately, dried, and then glued back together. It was then put into a white plaster jacket to stabilise it."

The claw is from a sea scorpion (eurypterid) Jaekelopterus rhenaniae that lived between 460 and 255 million years ago. It is 46 centimetres long, indicating that the sea scorpion to which it belonged was around 2.5 metres (8 feet) long – almost half a metre longer than previous estimates for these arthropods and the largest one ever to have evolved.

Eurypterids are believed to be the extinct aquatic ancestors of scorpions and possibly all arachnids.

Some geologists believe that giant arthropods evolved due to higher levels of oxygen in the atmosphere in the past. Others, that they evolved in an 'arms race' alongside their likely prey, the early armoured fish.

‘There is no simple single explanation’, explains Braddy. ‘It is more likely that some ancient arthropods were big because there was little competition from the vertebrates, as we see today. If the amount of oxygen in the atmosphere suddenly increased, it doesn't mean all the bugs would get bigger.’