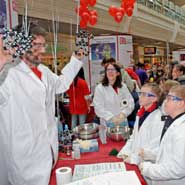 The Science Alive 2006 event at Broadmead shopping centre - one of the many public engagement events in which Bristol University and UWE are involved.

The University of Bristol and the University of the West of England have jointly won a £2 million bid to set up and operate a new National Co-ordinating Centre for Public Engagement.

The University of Bristol and the University of the West of England have jointly won a £2 million bid to set up and operate a new National Co-ordinating Centre for Public Engagement.

The Centre, which will be up and running early in 2008, will work with universities and other organisations across the UK to identify and share knowledge about the most effective ways of establishing dialogue and interaction between universities and the public. It will help transform the opportunities that universities and communities have to learn from one another and explore common interests.

This national body is part of a national network of local Beacons for Public Engagement that will be established as part of the same initiative in Manchester, Newcastle, Norwich, London, Cardiff and Edinburgh.

Funded by the UK higher education funding councils and Research Councils UK (RCUK), and supported by the Wellcome Trust, the whole £9.2 million scheme is the biggest ever launched to support public engagement throughout the UK. It brings together a number of different funders with the common goal of achieving a more joined up and embedded approach to public engagement.

The National Co-ordinating Centre for Public Engagement in Bristol will work with a range of partners including the BBC, the Museums, Libraries and Archives Council and v, the national youth volunteering charity. AlphaGalileo, the leading independent resource for European research news, and Involve, a national company that promotes public participation and empowerment, are also key partners.

Kathy Sykes, Professor of Sciences and Society at the University of Bristol and one of the architects of Bristol’s joint bid, said: “The National Co-ordinating Centre will provide leadership and will work with the Beacons, funders, policy-makers and the whole HE sector to make engaging with the public a key part of what it is to be an academic.

“Our vision is to open up the whole of Higher Education even more. HE will be more welcoming and accessible, and people in HE will find their research, teaching and learning enriched by contact with the outside world.”

Professor Stephen Hagen, Director of Research, Business and Innovation at the University of the West of England, who was also instrumental in preparing the bid, said: “This is a critical opportunity for the Higher Education sector to explore new ways of engaging with the public and of working in partnership with others to promote and enhance excellence in research, teaching and learning. Bristol, with its powerful history of achievement in science, technology and engineering, and more recently in the creative and new media industries, is an ideal base for the national centre.”

The two universities are very active in the field of public engagement, both individually and together. For example, the University of the West of England has developed an international reputation for its engagement work in Science Communication, Cities Research and health care. The University’s adoption of Knowledge Exchange recognises public engagement as an essential two-way process of learning from each other.

For its part, the University of Bristol has a very strong tradition of volunteering, with students contributing over 90,000 hours a year in the local community. Many of its academic departments, from Chemistry to English, run extensive engagement programmes for school children and adults.

Working together, the universities are closely involved in a number of highly successful public engagement initiatives, from the Bristol Natural History Festival to the biennial Science Alive! festival in the city’s Broadmead shopping centre.

Local initiatives of this kind by the universities will continue while they also pursue with their partners the new task of setting up the National Co-ordinating Centre and helping to spread good practice nationwide.

Both universities are also involved in Science City Bristol, which aims to enhance the city-region's culture of science and innovation, building a world-leading environment in which technology and business can thrive and thereby driving economic and social development across the city-region. Increasing public interest and understanding of science and technology through regional initiatives, particularly in schools, is central to the delivery of Science City Bristol's aims. The presence in Bristol of the National Co-ordinating Centre for Public Engagement can only help in this regard.

Speaking on behalf of Research Councils UK (RCUK), Professor Alan Thorpe, RCUK Chief Executive Champion for Science in Society and CEO for NERC, said: “Much of the work carried out by higher education institutions has a direct effect on people’s lives, so it is important that they are able to access it and have their say. The Beacons will do this by giving people the chance to get involved directly. They will also help redefine what it means to be a university in the 21st century, making public interactions and social considerations a core part of the role of any member of staff or student in any discipline.”

Professor David Eastwood, Chief Executive of the Higher Education Funding Council for England, said: “This initiative addresses the perception that universities are dominated by a research-driven culture giving academics little time to engage with the public. The beacons will help to change that perception by recognising, rewarding and supporting public engagement across all higher education activities and building capacity to do so in all subjects.

“Listening to and involving the public is of fundamental importance to the work of higher education and society. By working in partnership with the research councils through RCUK and the other major funders, we are providing a more co-ordinated approach enabling the sector to build on the rich diversity of activities already being undertaken. We were delighted by the initial response to this initiative which involved 87 proposals being submitted from higher education institutions.”

Clare Matterson, Director of Medicine, Society and History at the Wellcome Trust, commented: “The Wellcome Trust is delighted to fund the Beacons. We have long supported public engagement across higher education, and this initiative will provide leadership and culture change within institutions to recognise and support those individuals who already do – or those who want to – engage with public audiences about their work.”